2 days Hiroshima and Miyajima Itinerary was last updated on September 14, 2022

Hiroshima is a vibrant modern city, and is the capital of Hiroshima Prefecture. The city is fairly large with 1.2 million population and is located on a flat river delta, in the southwest of Japan’s Honshu Island. The City’s natural beauty can be seen in its impressive Chugoku Mountains to the north and the clear waters of the Seto Inland Sea in the south.

You can Hiroshima like a Local in a city where, every year, thousands of tourists make their way to Hiroshima Peace Memorial Park. The Memorial Park stands as a grim reminder of war and a focus for prayers for world peace. Whilst this should be a “must do” itinerary for any visitor, a carefully planned itinerary will allow you to experience not just the historic sites but also the City’s culture, food and nightlife.

Miyajima Island is a short ferry ride from Hiroshima and is easily accessible. This sacred island is home to the popular floating Torii gate and the infamous Mount Misen which is associated with a legend of miracle. According to the legend, a fire lit by a Buddhist monk, Kobo Daishi. have been burning for almost 1200 years.

I strongly suggest a visit to Miyajima Island alongside Hiroshima when visiting this part of Japan and 2 days is a perfect amount of time to experience both places.

OUR BEST READ ARTICLES ON JAPAN

1 | One Day Guide to the Best of Hiroshima City Travel

2 | Two Days on the Best of Hiroshima and Miyajima Island

3 | Ultimate Guide to Things to do in Miyajima Island

5 | The Unmissable Best 5 in Kyoto

8 | 5 Etiquette to observe at a Shinto Shrine in Japan

9 | Shinto and Books on Shintoism

There are two UNESCO World Heritage Sites in Hiroshima. One is the Atomic Bomb Dome in the Hiroshima Peace Memorial Park and the other is the Itsukushima Shrine in Miyajima Island. The Atomic Bomb Dome is an iconic structure as it was only a few meters away from the atomic bomb blast. It is symbolic as the beacon for world peace and an end to nuclear weapons.

I spent 2 days at Hiroshima and wished that I had spent more. This beautiful city has so much to offer every visitor right from food, sake and sights. If you have the time, try and spend 3 to 4 days. I assure you, you will have plenty to do! Here is my ultimate 2-day itinerary to the best of Hiroshima and Miyajima Island. Come along with me and see what I got up to.

Start your day as early as you can on Day 1. Make your way to Hiroshima Peace Memorial Park.

The first atomic bomb in human history was dropped on Hiroshima at 8:15 on the morning of August 6th 1945. The building shows the ferocity of the explosion. The skeletal remains of what used to be the Hiroshima Prefectural Industrial Promotion Hall stands as a grim reminder of that fateful day. There is a sense of sadness here but the City of Hiroshima has come a long way away from the destruction. Today, the Dome stands as a symbol of Hiroshima and as a focus for world peace.

The large concrete in the shape of a saddle holds 290,000 names of all those who lost their lives when the bomb fell on Hiroshima. New names are added each year as they are discovered.

3 | Flame of Peace in Hiroshima City

The pedestal that houses the Flame of Peace is designed in the image of two hands pressed together with the palms facing the sky.The Flame was lit on 1st August 1964, for a world without nuclear weapons, and will continue to burn until all nuclear weapons are abolished worldwide.

The Children’s Peace Monument was constructed in memory of Sadako Sasaki, who was exposed to the radiation of the bomb at the age of 2. She died of leukaemia about ten years later.

The Museum was built in pursuit of world peace and a world without nuclear weapons. It was opened in 1955 and conveys the realities of the atomic bomb. The exhibits here will truly touch your soul to say the least – clothing, watches, pictures – all tell the stories of the sufferings of ordinary human lives.

It is a building dedicated to mourning, the victims of the atomic bomb and to focus on prayers for world peace. It’s structure is designed to reflect 8:15 a.m., the time when the atomic bomb was dropped.

The Aioi Bridge was a unique structure in the shape of T and became the target point for the atomic bomb in 1945. The current bridge was built in 1983 and the old pillars bearing the marks of the bombing still preserved at the foot of the bridge.

8 | Explore the City of Hiroshima

Walk along the City’s shops to get a feel of the town and its people. Hiroshima Hondori is a covered area with all sorts of shops, fashion, restaurants and souvenir shops.

There is no better way to get to know a culture than through its food. Hiroshima is popular for its Sake and Okonomiyaki.

Okonomiyaki is regarded as Hiroshima’s Soul Food and it is really something that you ought to try. Its soft pancake is filled with a choice of seafood or meat and its cooked right in front of you. For a soulful experience of Hiroshima food culture, you could do a Foodie Tour and/or a Bar Hopping Food tour. Both experiences gives you a flavour of Hiroshima’s food and drink culture.

Getting to Miyajima Island from Hiroshima

Firstly, there is a short ferry ride from Hiroshima. The journey takes ten-minutes from Miyajimaguchi Pier (see below for information on How to get to Miyajima from Hiroshima). Secondly, there is also the longer route which takes about forty-five-minutes – World Heritage Sea Route by Aqua Net ferry. The World Heritage Sea Route takes off from Hiroshima Peace Memorial Park to Miyajima. There are clear directions to get to the departure point from the Memorial Park. You can’t miss it.

Day 2 of 2-day itinerary on Hiroshima and Miyajima Island

Arriving in Miyajima via either of the options above and you will be met with well posted signage to various attractions on the island. All attractions are within walking distance except the mountains. You can opt for a private tour of the island by rickshaw if you prefer.

The following are my recommended unmissable experiences on Miyajima Island.

The Itsukushima Shrine is an iconic shrine and is regarded as one of the “Three Views of Japan” along with Matsushimo Island and Amanohashidate, chosen by a 15th century scholar, Nihon Sankei. It is the only shrine in the world that is built on water and attracts visitors from all over the world.

The floating torii gate is one to be seen to be believed. An amazing craftmanship of six pillars which are not buried in the seabed. It is 16 meters tall and weighs 60 tons. The thickness of the giant legs is astounding as is the remarkable craftmanship and engineering involved to ensure the structure stays balanced in water. The two huge legs or pillars is made from 600-year-old Camphor trees. The pillars are weighted down by their own weight and tons of stones inscribed with Buddhist sutras are inserted into the loop of the cross beams that form the roof of the gate.

Mount Misen sits in the centre of Miyajima Island at 535m above sea level and is the highest peak in Miyajima. Mount Misen is a Must visit destination when you are in Miyajima. The mountains have a powerful effect on people and is a popular hotspot of spiritual energy. It offers amazing scenery which makes it a place hard to forget. I can assure you, you will speak of your experiences here for many times with friends and family.

About 1200 years ago, the fire in the Reikado Hall was lit by Kobo Daishi, a Buddhist monk as part of his religious training. It has been burning ever since. Nothing short of a miracle, one would say! This legend of miracle goes further – a pot of water is placed above the fire and legend has it that if you drink the boiled water, you will be cured of your illnesses. The very same fire that has been burning for 1200 years was used to light the flame at the Hiroshima Peace Memorial Park.

This is a holy hall built on the former training site used by Kobo Daishi. You will find this on Mount Misen, near to Reikado Hall.

The main street in Miyajima Island is a market street like many others in Japan. It is 350-meter long and is dedicated to restaurants, bars and souvenir shops. It is the busiest place in the Island.

The main street offers so many choices for you – try the island’s specialities:

The Momiji-manju are cakes shaped like maple leaf and is filled with red sweet bean (anko). There are also other varieties such as custard fillings. These Momiji-manju are found all over the island and in the shops along the main street. These cakes are made fresh and you could try them while they are warm and delicious.

Yaki-gaki is a signature dish of Miyajima Island. You can feel the smoky air of the grilled oysters as you walk along the main street. The oysters are grilled to perfection within minutes for you. Yaki gaki is a staple dish for the local fisherman and popular amongst tourists.

Renowned for its incredible architecture, this five storied pagoda is remarkable from every angle. Originally constructed in 1407, it was restored in 1533. The pagoda reflects Japanese style with Chinese influence.

No matter how busy a schedule you have, i strongly recommend setting aside some time to watch the sunset and just enjoy Miyajima before the last ferry leaves the island.

1 | Getting to Miyajima from Hiroshima

There are 2 options to get to Miyajima from Hiroshima.

The experiences listed above are my recommendations for an Ultimate 2-Day itinerary on the best of Hiroshima and Miyajima Island. You can fit in more activities or less to suit your schedule and to maximise your experiences in the historic city of Hiroshima.

My sincere wish is that this guide has been valuable in your search for the best of Hiroshima and Miyajima itineraries. If so, use the links embedded in this article to book your travels, places to stay or activities you intend to do. TTS earns a commission from qualified bookings or purchases at zero cost to you. Alternatively, you may wish to buy us a coffee. As always, your support is highly appreciated to keep this blog going.

Have a splendid time exploring, discovering and experiencing this historic city and magical island.

2 | From Hiroshima to Hakata by JR Shinkansen

City Pass: All in One Train, Subway and Bus

This article is regularly edited and updated. The last update was on September 14, 2022 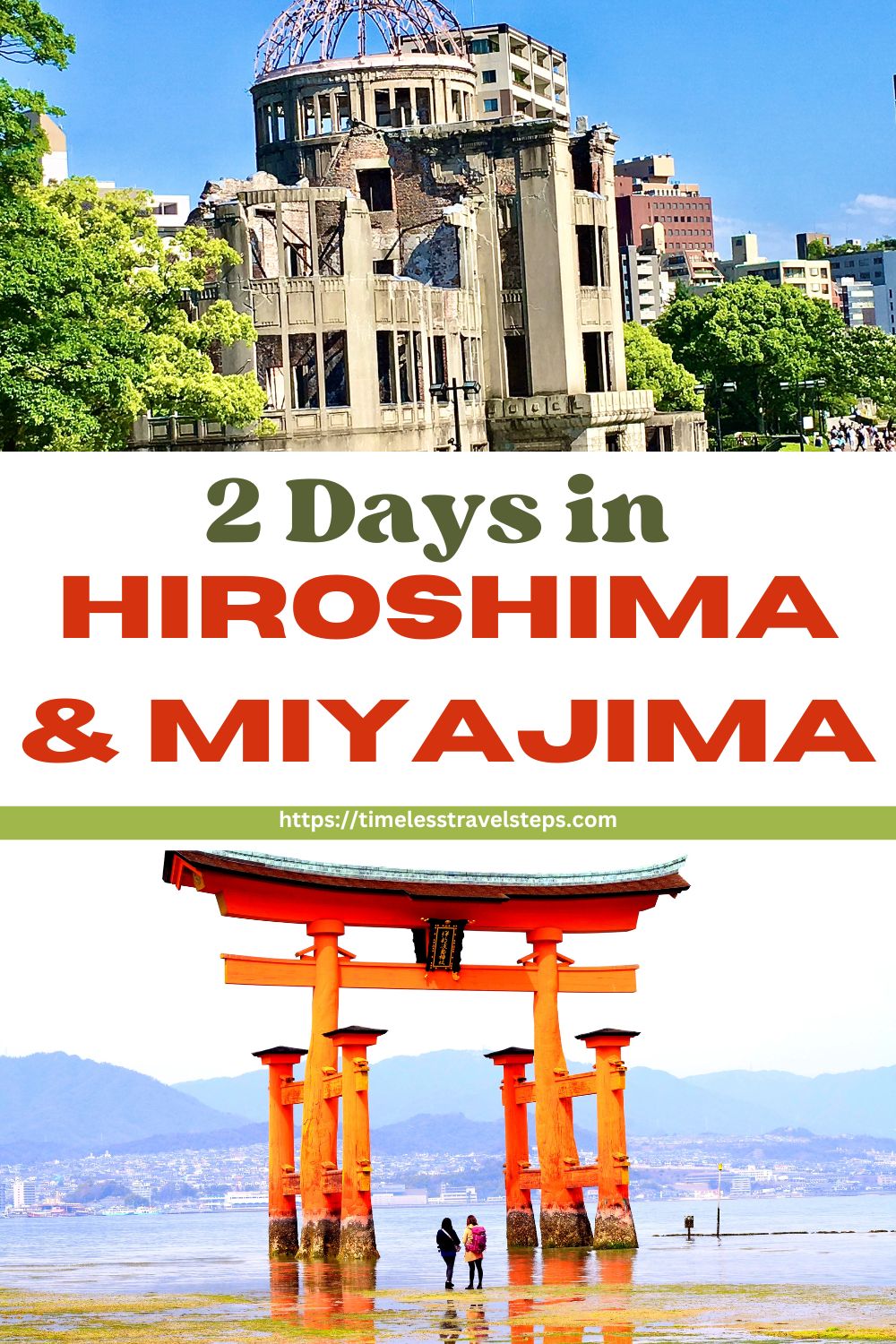