My latest love of London is an old ruined medieval Gothic church in the heart of London’s financial district, just a stone’s throw away from Tower Hill Station. On a quiet side-street tucked away between Tower Hill and Monument is St Dunstan Hill where you will find one of London’s most beautiful garden, often referred as “London’s secret garden” – St Dunstan in the East.

View post on: Why is Monument important to London?

This article and related articles are sprinkled with affiliate links. We may earn a commission from qualified purchases and bookings at no additional cost to you. These links have no influence on the editorial content we produce.

OUR BEST READ ARTICLES ABOUT LONDON

OUR TOP SELLING ACTIVITIES FOR LONDON

A Combined ticket for the London Eye and the Thames River Cruise;

St Dunstan in the East, London

There are many reasons to visit this charming little gem where there exists serenity and tranquillity. However, I have listed 8 reasons why St Dunstan in the East should be on your list when visiting London.

Why you should visit St Dunstan in the East, London

The Garden at St Dunstan in the East today is an unusual garden. By “unusual” I mean quirky and charming. The ruins of this church is one of the last of the Blitz’s casualties remaining in the UK. More on its history, below. Let us have a look at the reasons why you should visit this garden.

1 | A quirky and charming garden to escape to

The first view of St Dunstan is that it is overgrown with trees, has wall shrubs, ivy and flowers growing amongst its ruins. However, the subtle beauty of this chapel came through as I walked around the ruins.

The Chapel’s defining characteristics of Gothic architecture was very present. The pointed arches before me were beautiful and the old stone with its cracks showed its age, still retaining its somewhat uniqueness. The large glass-less window frames had stood strong the test of time. One can only imagine how beautiful these stone tracery would have been before it’s destruction when these were ornamented with stained glass illustrating stories from the Bible and the lives of the Saints.

The pointed arches before me were beautiful and the old stone with its cracks showed its age, still retaining its somewhat uniqueness. The large glass-less window frames had stood strong the test of time. Click to Tweet

This visit was undertaken in the summer months and the summer setting was charming with fresh green foliage from the trees growing through windows. It was rather enchanting to have vines winding around the walls and wildflowers, popping here and there on the walls while palm trees added a tropical feel to St Dunstan in the East.

A gorgeously green spot in the summer sunshine. Along with this is also a fountain in the middle of what used to be the nave.

The fountain in the middle is surrounded by benches. There are many benches dotted around  the ruins to offer a place to sit and where you can enjoy the tranquillity of this garden. One could bring a book to read or a sketch book to capture the settings at St Dunstan in the East, or even have your lunch.

The tranquillity here is ever so present as it almost seems like a strange peace had descended over the garden. I am sure this tranquillity continues to exist even when there are grey skies which so often dominate London, giving it a moody atmosphere.

3 | The rich history of St Dunstan in the East

According to records held by London’s Gardens & Parks Trust, there had been a church that stood here since ancient times. St Dunstan’s was built around circa 1100 and survived the Great Fire in 1666, sustaining severe damage. The damage was repaired and a tower plus a steeple was designed by Sir Christopher Wren which were added between 1695-1701. The church was rebuilt between 1817 and 1821. However, during London Blitz in 1941, when London was raining bombs, the small church took a direct hit that destroyed the structure, leaving only the north and south walls, the tower and steeple. In 1953, the spire was reconstructed and later, the tower in 1970.

The site remained in ruins until 1967 when the City of London acquired it and turned it into a garden for public use in 1971. The ruins have been designated Grade 1 Listed building. This means that it is protected from further development and destruction.

5 | How St Dunstan in the East inherited its name

The church, St Dunstan in the East took its name from a 10th century monk. Dunstan (908 – 988) was an English Bishop who later became the Archbishop of Canterbury. He is said to have a colourful past for he survived brushes with black magic, leprosy and the devil himself.

Sir Christopher Wren is a highly acclaimed English architect in history who had designed about 50 churches in the City of London. The most prominent and regarded as his masterpiece is St Paul’s Cathedral which took 35 years to build. Other designs of Wren include Royal Hospital at Chelsea (1682-1689), Hampton Court Palace (1689-1696) for King William III and Queen Mary, and the Royal Naval Hospital at Greenwich (1696-1705).

“Reader, if you seek his monument, look about you.”

7 | Popularity of St Dunstan in the East

A quick research on St Dunstan in the East showed that it could be hired as a venue for wedding reception and parties. It is also a popular spot for magazine photoshoot and not forgetting Instagram poses as well.

St Dunstan in the East is not only a popular spot for peace and tranquillity for Londoners to escape to but it also stands as a testament to the resilience of the City of London which survived the Blitz.

London inspires me to explore and write compelling thoughts of this beautiful city even if I had seen something tens-of-times. Somehow exploring London these days are a “discovery” anew of something old. May be because I am a Londoner, I am biased but as I travelled also to faraway places, I discover that there is no place quite like London. Not quite. Not anywhere.

How to find St Dunstan in the East

You can reach St Dunstan in the East at:

Ramped access via the Idol Lane entrance to the north side of the garden only.

Remainder of the garden accessed via steps.

​​Open all year round from 8am to 7pm or dusk, whichever is earlier.

Walking route from Tower Hill Station to St Dunstan in the East.

You may also like the following articles on London’s Parks and Gardens:

5 | Reasons why you would enjoy visiting the Sky Garden

Airport Transfer from Gatwick Airport to London Hotel/Point of Stay in Central London;

The London Pass from 1 to 10 days for discounted theatre tickets, free entry to top attractions and dine at London’s restaurants for less;

Changing of the Guard Experience;

St Dunstan in the East-8 reasons why you should visit this Serenity amongst Ruins was first published at timelesstravelsteps.com

This post is regularly edited and updated. Last updated August 29, 2022 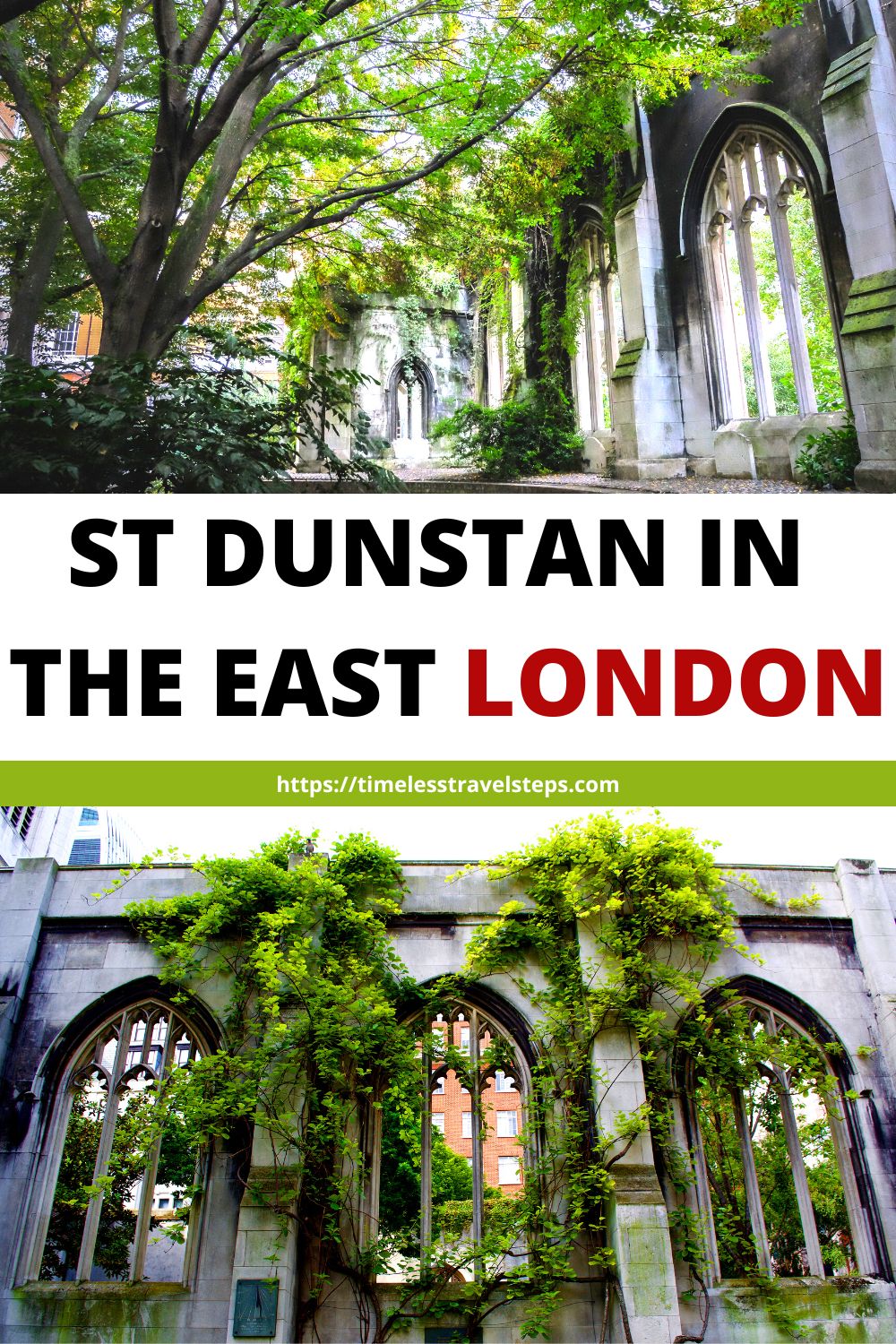