The Bloody Tower at Tower of London is one of the twenty-one towers that make up the Tower of London fortress and Royal Palace. It was not built to house prisoners but as events turned out, it became home to some famous high status prisoners. Tales of murder, mystery and ghosts surrounds this intriguing tower, making it the most notable tower in the Tower of London, earning itself the reputation as the “Bloody Tower.”

OUR BEST READ ARTICLES ABOUT LONDON

OUR TOP SELLING ACTIVITIES FOR LONDON

A Combined ticket for the London Eye and the Thames River Cruise;

SELL OUT DAY TRIPS FROM LONDON

A Day Tour to Windsor, Stonehenge and Bath;

Windsor, Stonehenge and Oxford in a day;

A Full Day at Cotswolds with Lunch.

Built in the 1220s under the reign of King Henry III, the Bloody Tower is located on the south side of the fortress, facing the Thames River, adjacent to the Wakefield Tower. which was formerly home to the royal apartments.

When it was built, the tower was intended to control the main river entrance to the Tower of London. However, in 1280, under Edward I, the outer defensive wall was built which meant the entrance via the Bloody Tower was now land locked. Consequently, the tower’s entrance archway became the main access point between the inner and the outer ward with a narrow cobbled passage on the ground floor. The entrance archway is blocked by spiked portcullis, controlled with a lifting mechanism that still remains in operation today. The Bloody Tower, like many of the medieval era has both an upper and lower chamber.

The Tower underwent further expansions between 1360 – 1362 under the reign of Edward III but the most significant changes came in the 17th century when the prison Tower became home to Sir Walter Raleigh, his family and his servants.

Origin of the name ‘Bloody Tower’

The Bloody Tower was originally known as the Garden Tower, which was related to the Constable’s Garden. No one really knows how, why or what inspired the name ‘Bloody Tower’ but all research seems to suggest a strong association with the mysterious disappearance and supposed murder of two young princes in 1483. The Tower derived its name from the 1560s when it was believed that the princes were murdered. More on this below.

Prisoners of the Bloody Tower at Tower of London

There were a number of prisoners at the Bloody Tower. Archbishop Tudor Cranmer, Bishops Ridley and Latimer, Protestant martyrs condemned to death in 1556 by Queen Mary I who was Catholic. Thomas Overbury, poet and courtier was poisoned in Bloody Tower in 1613. Judge Jeffreys died at the Tower in 1688. Amongst all of the prisoners, the most notable high status ones were Sir Walter Raleigh and the two young princes.

One of the most famous prisoner of the Bloody Tower was Sir Walter Raleigh. He was an Englishman, an officer, an explorer and a poet who fell from grace and was imprisoned by James I.

Raleigh had an inquisitive mind, a passion for poetry and science.

Raleigh was a prisoner of high status. He spent thirteen years here. The Tower was extensively renovated to accommodate his wife, his two sons and he was allowed three servants. He was given access to a courtyard outside the Bloody Tower. This was an opportunity for Raleigh to do his daily exercise and to cultivate a small garden in which he could grow some unusual plants that caught his interests while travelling in South America.

In his garden, he grew plants to create medicinal potions. Today, a visit to the garden at the Bloody Tower and you shall see plants such as mint, bistort and rosemary which Raleigh had used in his remedies.

Now, after 400 years since his execution, a visit to the Bloody Tower reveals a complex and a brilliant man, who famously introduced “potato” to English tables, and less famously, tobacco. It all appears that he was just an adventurous man whose spirit was crushed by imprisonment.

Sir Walter Raleigh was denied his liberty but not his comfort. He was assigned two rooms on the second floor of the Bloody Tower. His family could visit and he could grow plants. He was in captivity for thirteen years. During his imprisonment he wrote a book, “History of the World” which was published in 1614. Sir Walter Raleigh was beheaded four years later in 1618 at the Old Palace Yard, Palace of Westminster.

Sir Walter Raleigh’s book, History of the World is available for purchase on Amazon as reprint or as cloud versions. Options below.

An Abridgment Of Sir Walter Raleigh’s History Of The World: In Five Books (1698) Paperback. 470 pages. Published 2010

This scarce antiquarian book is a facsimile reprint of the original. Due to its age, it may contain imperfections such as marks, notations, marginalia and flawed pages. Because we believe this work is culturally important, we have made it available as part of our commitment for protecting, preserving, and promoting the world’s literature in affordable, high quality, modern editions that are true to the original work.

The History of the World Kindle Edition

Download the Kindle version or buy it in Hardcover or Paperback.

This is a reproduction of a book published before 1923. This book may have occasional imperfections
such as missing or blurred pages, poor pictures, errant marks, etc. that were either part of the original artifact,
or were introduced by the scanning process. We believe this work is culturally important, and despite the imperfections,
have elected to bring it back into print as part of our continuing commitment to the preservation of printed works
worldwide. We appreciate your understanding of the imperfections in the preservation process, and hope you enjoy this valuable book.

Despite the many prisoners who had seen their last days in the Bloody Tower, by far the saddest and most gruesome of events that made the Bloody Tower infamous was the mysterious disappearance of the two young princes.

The two Princes, Edward V and his younger brother, Richard Duke of York – sons to King Edward IV were under the guardianship of their uncle, Richard Duke of Gloucester who was their Lord Protector. They were brought to the Tower of London and was confined to the walls of the Bloody Tower. According to the Yeoman Warder tour I joined, the Princes may have watched from the top floor windows of the Bloody Tower the Coronation procession of their uncle, Richard Duke of Gloucester, proclaimed as King Richard III when it should have been Edward V, the older prince. The two Princes were last seen alive in June 1483. Mystery surrounds their disappearance.

It is said that their disappearance is so because they were murdered in the late summer of 1483. There are conflicting theories as to who ordered their murders.

According to the traditionalists theory, it is believed that the Princes were killed on their uncle Richard’s orders. On the other hand, the revisionists argue that his successor, Henry VII had equal cause to remove the two Princes, as they stood as much in his path to the throne as they did in Richard’s. (Richard III was defeated at the Battle of Bosworth Field in 1485 by the Lancastrian Henry Tudor, who ascended to the throne as King Henry VII.

About two-hundred years or so later since the disappearance of the Princes from the Bloody Tower, skeletons were discovered behind the stairs leading to the White Tower in 1674. These were later removed to the Henry VII Chapel at Westminster Abbey at the command of Charles II.

Georgina says: There are inundated stories of the Tower being haunted by the many poor souls who lost their lives here. One such story/legend is that the Bloody Tower is haunted by the ghosts of the two princes. It was reported back in the 15th century where the Tower Guards spotted shadows of two small figures gliding down the stairs in white night shirts. The figures were said to stand silently, hand in hand, before fading back into the stones of the Bloody Tower.

The skeletons were re-examined in 1933. It proved to be those of two boys aged about 12 and 10, the same ages as the Princes when they disappeared. The disappearance of the Princes still remains a cold case as to who was responsible for their death.

If you wish to learn more and delve deeper into the mystery of the missing princes in sinister circumstances, the following books either in print or cloud are highly recommended.

Avaialble on Kindle, Hardback and Paperback

View article on Tower of London – The Best Guide to What you Need to Know to curate your visit to this royal palace.

My sincere wish is that this guide has been valuable in your search for the best of the Bloody Tower at Tower of London If so, use the links embedded in this article to book your travels, place to stay or activities you intend to do. TTS earns a commission from qualified bookings or purchases at zero cost to you. Alternatively, you may wish to buy us a coffee. As always, your support is highly appreciated to keep this blog going.

Airport Transfer from Gatwick Airport to London Hotel/Point of Stay in Central London;

The London Pass from 1 to 10 days for discounted theatre tickets, free entry to top attractions and dine at London’s restaurants for less;

Changing of the Guard Experience;

The Bloody Tower at Tower of London was first published at timelesstravelsteps.com

This post is regularly edited and updated. Last update was on September 4, 2022 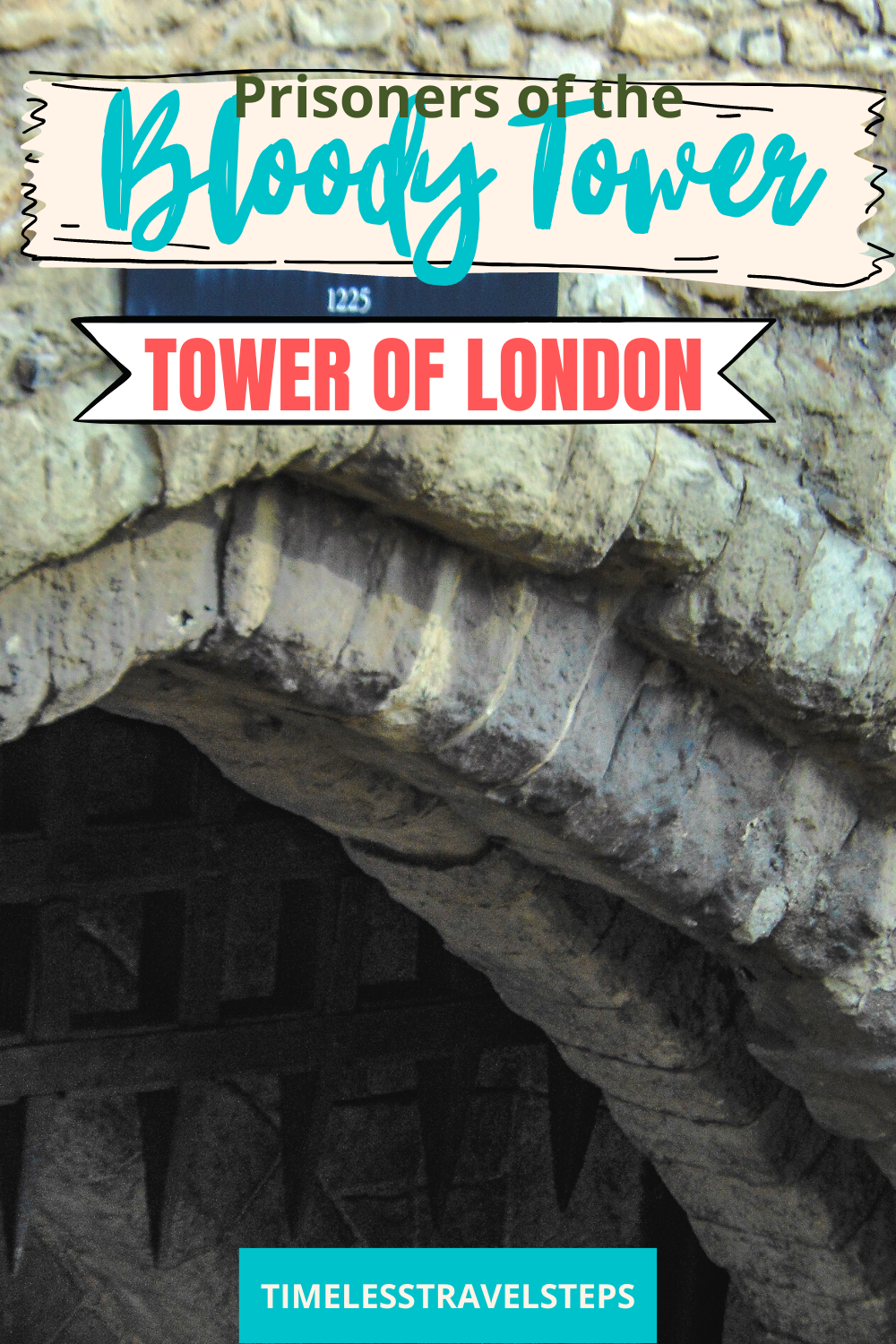