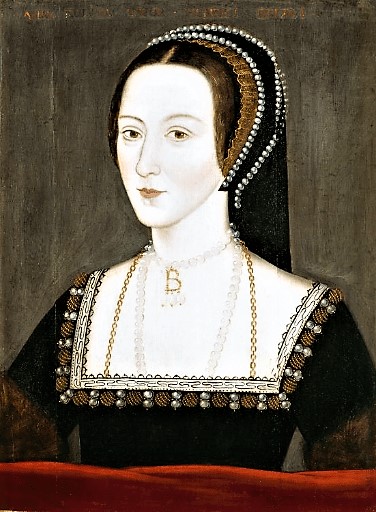 Anne Boleyn Britain’s most well travelled ghost was strong willed, intelligent and charming Tudor Queen who stole the King’s heart, successfully kept him waiting for seven years until he divorced his queen and reformed the church. She tragically lost her life in 1536. Those who read her story cannot but fall in love with her courage and the eloquence with which she conducted herself on the day she was executed. She is a queen that lives on in many ways.

Since her death, her ghost had been seen regularly at various places throughout England – Salle Church, the Tower of London, Blickling Hall, Marwell Hall and Hever Castle, earning her the reputation as Britain’s most well travelled ghost.

It had been reported that she is often seen as how she was in life, young, beautiful and happy. There are also reports of her as after her execution, headless, clutching her head and blood dripping from her severed head. There is no doubt that Anne Boleyn, Britain’s most well travelled ghost was unique and the impact she left us all with is a significant one. Perhaps, by taking a look at what happened to her may explain to some extent why she makes her “presence” so frequently.

History of Anne Boleyn – In a nutshell

Anne was born to Thomas Boleyn, later 1st Earl of Wiltshire and to Elizabeth Howard, daughter to Thomas Howard, 2nd Duke of Norfolk and Elizabeth Tilney, around 1501 in Blickling Manor, Norfolk. She, along with her two other siblings received good education suited to their status. Her youth was spent in Netherlands and in France, She returned to England when she was twenty-two, and immediately secured herself a position as the Lady-in-waiting for Catherine of Aragon, Queen consort to King Henry VIII.

Recommended read: The Boleyn Family – Who were they and What happened to them after Anne’s death

Anne is described as intelligent, headstrong, principled and the only person who could go head to head with the King. She dazzled the royal court with her charming French flair and stole the King’s heart.

Henry VIII fell in love with Anne and desperately wanted to be with her, believing also that Anne would give him a son that he so longed to have as heir to the throne. He was still married to Catherine of Aragon, and as Catholics, the Pope refused his request for a divorce. Henry took drastic actions, completely reforming the church, breaking away from Rome , creating a new branch of Christianity and making himself the head of church. Thereafter, his marriage to Catherine of Aragon was annulled. However, before the annulment was through, Anne discovered that she was pregnant. Henry and Anne married in secret first, then officially in July 1533. Anne gave birth to Elizabeth in September.

As Henry was desperate for male heir, he was disappointed when Anne gave birth to baby girl. Anne went on to have two further pregnancies but both failed. The relationship between Anne and Henry broke down and Henry began his courtship with Jane Seymour, wife number three. Henry wanted to get on with his life with Jane Seymour and wanted to be rid of Anne.

Henry, together with Thomas Cromwell, his chief minister, trumped up charges of incest, adultery, treason and witchcraft against Anne Boleyn. Anne was charged, tried and found guilty on all counts. She was beheaded by a highly skilled French swordsman at Tower Green on May 19 1536, just three years since becoming queen consort to Henry VIII.

Recommended read: Anne Boleyn – The most magnetic and enduring of Tudor queens

The following are some fascinating accounts relating to the legends of hauntings of Anne Boleyn. As with many stories passed down in folk tales, they can be elaborated and embellished with the telling. I have not personally experienced a sighting of Anne, and I shall leave it to you, the reader to make of it what you will.

The current hall was built upon the ruins of Blickling Manor, which was former home to the Boleyns until 1505. Anne, along with her siblings Mary Boleyn and George Boleyn were born here.

At Blickling Hall, the tale has Anne as the occupant of a carriage, dressed in pure white with her blood drenched head resting on her lap. The carriage is drawn by a headless horseman and four headless horses. Once Anne arrives at the Hall, she is said to roam the corridors from sundown to sunrise. This manifestation takes place each year on the anniversary of her death, May 19th.

Anne was also sighted by the lake at Blickling. Sometime during World War II, the butler at Blickling witnessed a mysterious lady by the lake. She was dressed in grey, a white lace collar and a mob-cap. He asked her what she was looking for to which she replied:

“That for which I search has long since gone”

Although it has been said that this may not be Anne because the costume described appeared more seventeenth century – lace was extremely rare in 1530s. However, supporters of Anne point out that she was beheaded wearing something similar.

Blickling Hall is also said to have a lost chamber! It was a study called the ‘Old Bullen’ associated with Anne Bullen. The room was said to have such an evil atmosphere. It was walled up and its whereabouts is now lost. As an aside, it is hard to imagine Anne, who was elegant and sophisticated would be an evil atmosphere, perhaps intense, but not evil.

The magnificent Hever Castle, the family seat of the Boleyns has strong connections with Anne. Hever Castle was where Anne grew up and her ghost is said to appear around Christmas time. Christmas was Anne’s favourite time of the year.

Anne is said to appear crossing River Eden, close to Hever Castle, heading home. Anne has also been seen walking around the grounds of the castle. There is an old oak tree, where Henry VIII and Anne spent many hours during their courtship. Anne has often been seen underneath the tree.

It is no surprise that Anne Boleyn has been seen many times at the Tower of London, a place where she spent her last days. One of the famous sighting of Anne was in 1864 by a guardsman on duty, attested to by one General Dundas.

The guardsman saw a woman clad in white emerging from the Queen’s house across the lawn. The guard, thinking that she was real, charged at her in an attempt to ward her off, and ended up charging through her ghost! Realising he had just encountered a ghost, the guardsman fainted. The military court wanted to court-martial the guardsman for fainting on duty and abandoning his post – the ghost of a Tudor queen is hardly a defence! The charges were dropped when General Dundas testified as a witness.

Another sighting of Anne at the Tower was at the Chapel Royal of St Peter ad Vincula. Late one night, the Captain of the Guard, saw a light flickering inside the chapel. In an attempt to find the source of the light, he took a ladder, and climbed up to view. He saw ladies and knights dressed in century old clothes in a precession led by Anne Boleyn.

The ghost of Anne Boleyn is frequently seen walking throughout the church at the Tower towards her grave.

There has been further sightings of Anne as a ‘bluish figure’ floating across the green to the Queen’s house. On one occasion, there was a strange glow coming from one of the windows at the House, moving between rooms, believed to be Anne. Though many wardens and guardsman had witnessed it, few spoke of it.

There had been numerous sightings of Anne at the Tower of London and it appears she is very drawn to the last place she was alive, or perhaps because it was the place she felt most betrayed.

Recommended read: Tower of London – The best guide to what you need to know

One legend has it that Anne strolls the grounds of Yewtree Walk at Marwell Hall, Hampshire.

Marwell Hall was home to the Seymours and Jane Seymour and Henry VIII spent many hours together here while Anne was a prisoner at the Tower. There are suggestions that Jane and Henry were secretly married here, prior to their official wedding in May 1536.

It is little surprise that Anne’s ghost is sighted at Marwell Hall, after all this is the place where she was betrayed by her husband.

There are stories that Anne is sometimes seen at Salle, St Peter & St Paul Church on the anniversary of her execution.

There is an unsubstantiated legend that Anne Boleyn is buried in the church cemetery which is why she is seen here. According to the legend, friends of Anne removed her body from the Chapel Royal at the Tower on the night of her execution and brought it to Salle to be buried there. She was buried at midnight, and a black slab placed over her grave.

The church was built in part by Anne’s paternal great grandfather, Geoffrey Boleyn. Earliest mention of the story is recorded by witnesses at two weeks after Anne’s execution. It has also been related by Charles Dickens, a novelist in his article in Bentley’s Miscellany, 1848 Vol 23 p.233

The mystery and truth of Anne’s final resting place will probably never be resolved. However, a permanent memorial for Anne Boleyn is erected in Tower Green, Tower of London.

Windsor Castle, home to the Queen and the oldest occupied castle in the land as well as the world has also been visited by the ghost of Anne Boleyn. Legend says, Anne has been wandering the halls on numerous occasions. Dean’s Cloister was home to Anne on a few occasions and story tells of her standing at one of the windows there.

Recommended read: Windsor Castle and Windsor in one day

Anne Boleyn’s ghost sightings are somewhat unique as she is seen in so many places, Britain’s most well travelled ghost. These places have verified connections to Anne’s life. She makes her “presence” probably because her last days were fraught with so much trauma that some of her energy are imprinted in each of the locations that had been important to her, either by way of happy memories or betrayal. Anne’s story is a sad one and her restless soul travels.

While some may be sceptical as to the ‘existence’ of ghosts and paranormal activities, others stand by their bona-fide sightings. Whatever the truth might be of these tales, the continued popularity of Anne Boleyn, demonstrates she still has the power to fascinate and captivate us as she continues to travel across Britain.

More on history of Britain

Learn more on the History of Britain for added value to your visits to historical sites:

Anne Boleyn The Most Magnetic and Enduring of Tudor Queens

Queen Victoria | An intimate look at the woman behind the Crown. 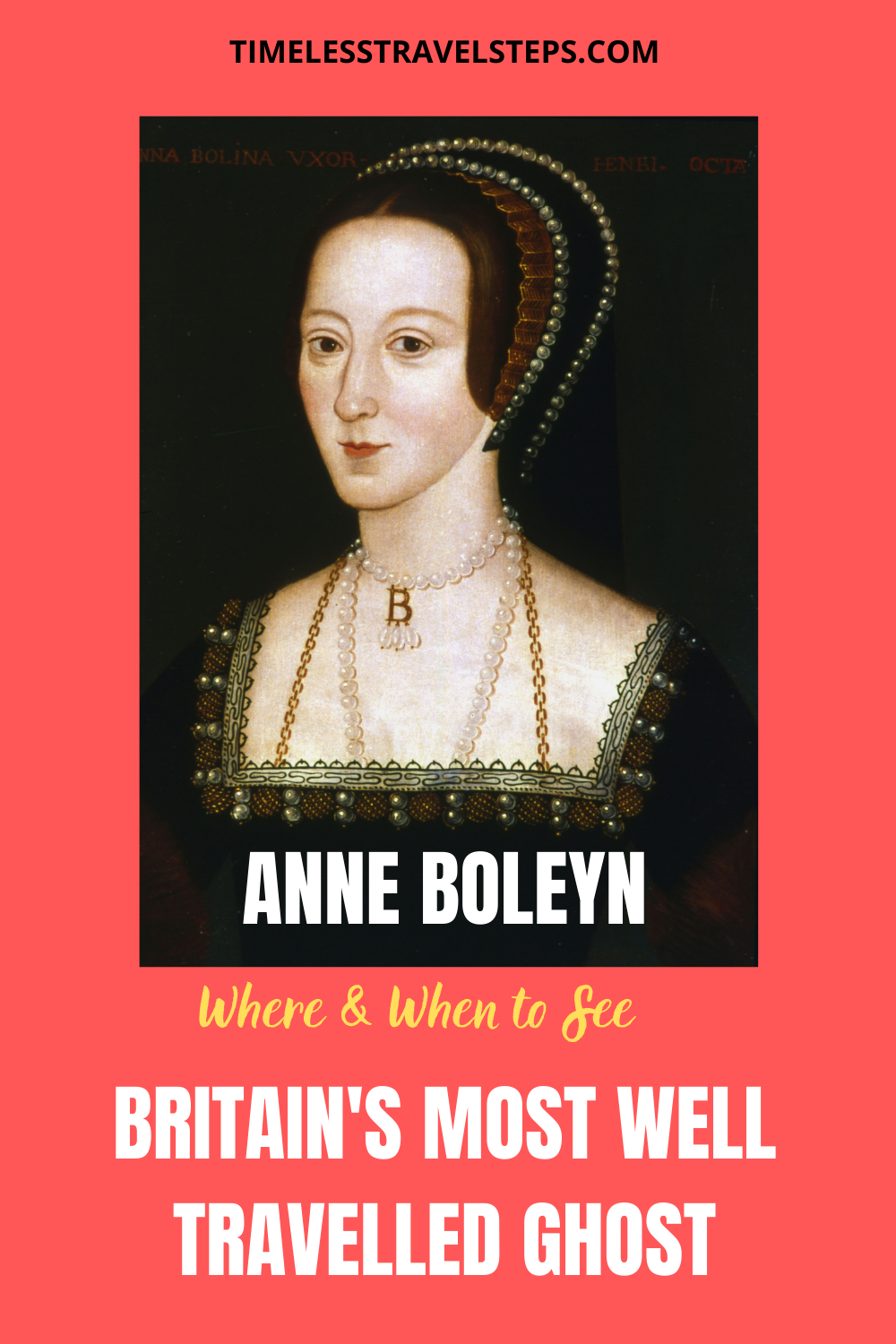