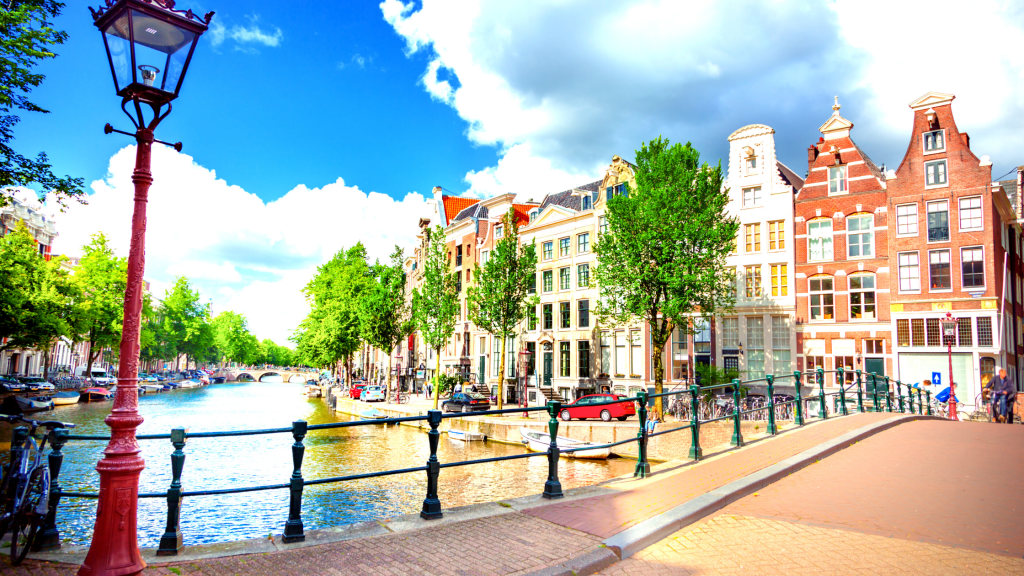 For some, Amsterdam is a city of sin, while for some others, it is a city of freedom, an exemplary for others to follow. Some even compare this European city to the American city, San Francisco for the freedom and fun it offers along with its deep roots in art and culture. Whichever way you decide to define the capital of Netherlands, Amsterdam is a unique city that means many things to many people.

Best known for its abundance of tulips, gingerbread canal houses, and friendly biking trails, Amsterdam is also a city that is rich in opportunities, art, and romance, Dubbed Venice of the North for its historic winding canals, Amsterdam goes beyond from being just a city for most travellers.

Over the years, the simplicity of this picturesque city had inspired locals and travellers alike, shaping each of their lives, one way or another. Here are the best of the best 29 inspiring quotes and sayings on Amsterdam by some of the famous authors and celebrities to inspire your visit 🙂

BEST TIPS: Book tours and tickets in advance: Best tours in Amsterdam. Select the I Amsterdam City Card for free entrance to 60 museums, one free canal cruise, discounts and unlimited use of Amsterdam’s public transport. Discover what’s more is included.

Kristin Cashore is an American young adult fantasy writer. Amongst her New York Bestsellers are Graceling and Fire.

Amsterdam is not Holland. It is a city that attracts people from all over Holland. And lots of international tourists and party people”

Eddy de Clerq is a Belgian record producer who founded the first underground dance movement and the rise of Amsterdam club scene.

I love Amsterdam. The city is vibrant and alive. It’s fresh and so open. It’s definitely one of my favourite places.”

Stefon Harris is an American jazz vibraphonist. Besides being a musician, he is also an educator and thought leader.

Charles Landry is an English author, speaker and international adviser on the future of cities best known for popularising the Creative City concept.

Historic Amsterdam, that old part you first see when you turn up at Centraal Station, may have its monuments, but it’s also the most tawdry and overcrowded part of the city.”

David Hewson is a contemporary British author of mystery novels. His award winning novels include The Killing, The Villa of Mysteries and the most recent, The Garden of Angels.

The Garden of Angels

The Garden of Angels

OUR BEST SELLING TOURS IN AMSTERDAM

Some tourists think Amsterdam is a city of sin, but in truth, it is a city of freedom. And in freedom, most people find sin“

Amsterdam is like the rings of a tree: It gets older as you get closer to the centre.

John Green is an American author won the 2006 Printz Award for his debut novel, Looking for Alaska, and his fourth solo novel, The Fault in Our Stars, number one on The New York Times Best Seller list in January 2012.

Looking For Alaska: Read the multi-million bestselling smash-hit behind the TV series

The Fault in Our Stars

The Fault in Our Stars

I am a village boy, and Amsterdam for me was always the big town.”

I think Amsterdam is to Holland what New York is to America in a sense. It’s a metropolis, so its representative of Holland, but only a part of it – you know, it’s more extreme, there’s more happening, it’s more liberal and more daring than the countryside in Holland is”

Anton Corbijn: Inside the American

Most visitors to Amsterdam will wander into the red-light district out of sheer curiosity. The narrow streets are mostly safe day and night – just don’t try to take pictures of the women working in the windows.”

But words are water in Amsterdam, they flood your ears and set the rot, and the church’s east corner is crowded.”

This city is like no other city in the world. It is brilliant but it is bloated, and I’ve never called it home”

Jessie Burton is an English author and actress. She has published three novels – The Miniaturist, The Muse, and The Confession.

By Jessie Burton The Miniaturist [Paperback]

The Miniaturist: A Novel

Quotes and Sayings on Amsterdam Canals

Amsterdam is intimately connected with water. Its one-hundred-sixty five canals were constructed over centuries to stimulate trade, transport and to reclaim land. The 17th century Amsterdam Canal Ring is of great cultural and historical value, now recognised as UNESCO World Heritage Site since 2010. Here are some of the best quotes and sayings on Amsterdam canals to give you an idea of what its like.

In Amsterdam, the water is the mistress and the land the vassal. Throughout the city, there are as many canals and drawbridges as bracelets on a Gypsy’s bronzed arms.”

Felix Marti-Ibanez (1911-1972) was a Spanish author and publisher who emigrated to USA after the Spanish Civil War in 1939, thereafter becoming an American citizen.

Amsterdam is such a fun, cool place, and it’s very instagrammable with the canals and the boats and the flowers and the architecture. It’s amazing for outfit of the day shot.”

Nikkie de Jager better known as Nikkie Tutorials is a Dutch makeup artist and beauty vlogger. She has 13.8 million subscribers to her Youtube channel.

Amsterdam was a great surprise to me. I had always thought of Venice as the city of canals; it had never entered my mind that I should find similar conditions in a Dutch town.”

James Weldon Johnson (1871-1938) was an American writer and civil rights activist. He was the leader of the National Association for the Advancement of Colored People (NAACP), where he began working in 1917.

Stand outside De Eland, on the Berenstraat Bridge over the Prinsengracht, and you see what real Amsterdam life is like.”

In Amsterdam, the river and canals have been central to city life for the last four centuries.”

Janet Echelman is an American sculptor and fiber artist whose work have been publicly displayed at specific sites.

Amsterdam has more than 150 canals and 1,250 bridges, but it never seems crowded, nor bent and bitter from fleecing the tourist.”

Quotes and sayings on Amsterdam that may make you smile…

Call me a pig, but isn’t it brilliantly refreshing how early the Dutch eat dinner? When they’re still laying out the cutlery in achingly hip Barcelona , they’re hanging the closed sign on the restaurant doors of old Amsterdam.”

Julie Burchill is an English journalist and writer who began as a staff writer at the New Musical Express at the age of 17. She contributes to The Daily Telegraph, The Sunday Times and The Guardian. Burchill’s popular novels are many but below are just two:

Love it or Shove it: The Best of Julie Burchill

Love it or shove it

I dropped my pants in a tattoo parlour in Amsterdam. I woke up in a waterbed with this funky-looking dragon with a blue tongue on my hip. I realized I made a mistake, so a few months later I got a cross to cover it. When my pants hang low, it looks like I’m wearing a dagger!

Angelina Jolie is an American actress, filmmaker and a humanitarian. She has won many awards including Academy Award and three Golden Globe Awards. She has been named Hollywood’s highest-paid actress numerous times.

Amsterdam is a city where the number of bicycles outnumber its residents! The city is perfectly set-up with dedicated cycle lanes and regarded as the second most bike-friendly city in the world, only just after Copenhagen. Here are three quotes and sayings on Amsterdam that somewhat describes the city of cycles.

In Europe, I always have fun bike riding in Amsterdam”

Ezra Koenig is an American musician, singer-songwriter and radio personality

My experience in Amsterdam is that cyclists ride where the hell they like and aim in a state of rage at all pedestrians while ringing their bell loudly, the concept of avoiding people being foreign to them.”

Here people cycled with a reckless swagger, talking on the phone and eating breakfast.”

David Nicholls is an English writer and novelist. His popular books are One Day and Us.

Quotes and Sayings on Amsterdam to Inspire Creativity

The following quotes speaks of a city that inspires creativity.

I get inspired in certain places. You have to write in places like Amsterdam or Paris or New Zealand, when you’re standing on a yacht, looking out at the middle of the ocean.”

When I wrote my book about Amsterdam, the main objective was to talk about the city’s creativity rather than just its design.”

Amsterdam is a breeding ground for new creative pursuits in many areas fueled by tolerance and openness to ideas, unlike any world city I’ve been to. There is something for everyone here, especially when you dare to go off the beaten path.”

Amsterdam lives and breathes creativity. One moment you walk into a building from the 17th century, and the next you find yourself in a hub of creative start-up companies”

San Francisco is a lot like Amsterdam – free, open-minded and casual – though I expected better weather.”

What’s special about Amsterdam is that the city is able to connect worlds that are not otherwise connected.”

Marcel Wanders is a Dutch designer and as art director who designs architectural and interior products.

OUR MOST POPULAR ARTICLES ON AMSTERDAM:

Where to eat the best Stroopwafel in Amsterdam

The 28 Very Best Things to do in Amsterdam

It’s no surprise that Amsterdam in one of the most visited city in Europe – it may not be as glamorous as Paris or London nor is it deeply rooted in Roman history as Italy but Amsterdam is a city that offers you an insight into culture, beautiful places to stay with plenty of things to do whether you are visiting for 24, 48 hours or even much longer.

Travelling from UK to Netherlands 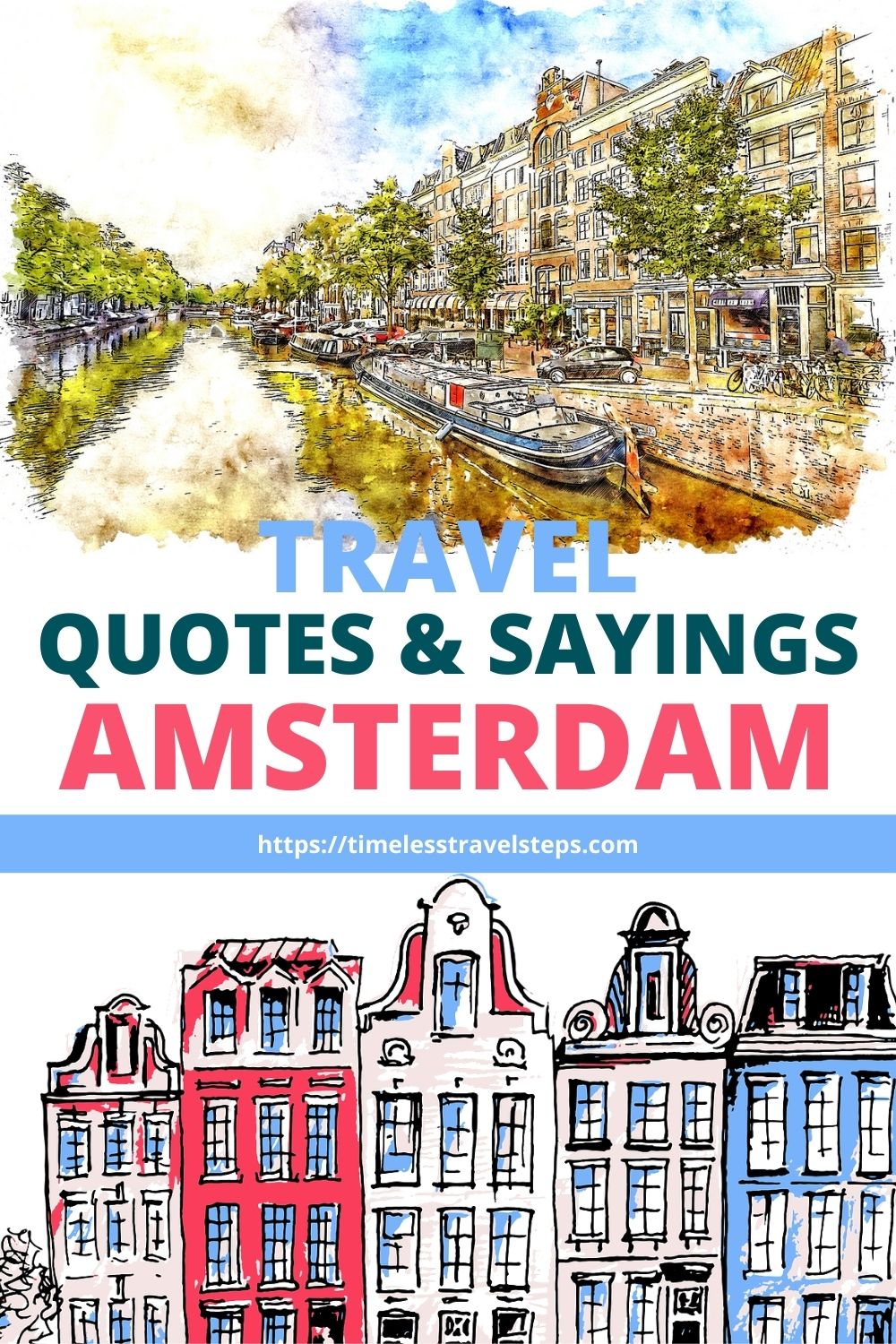