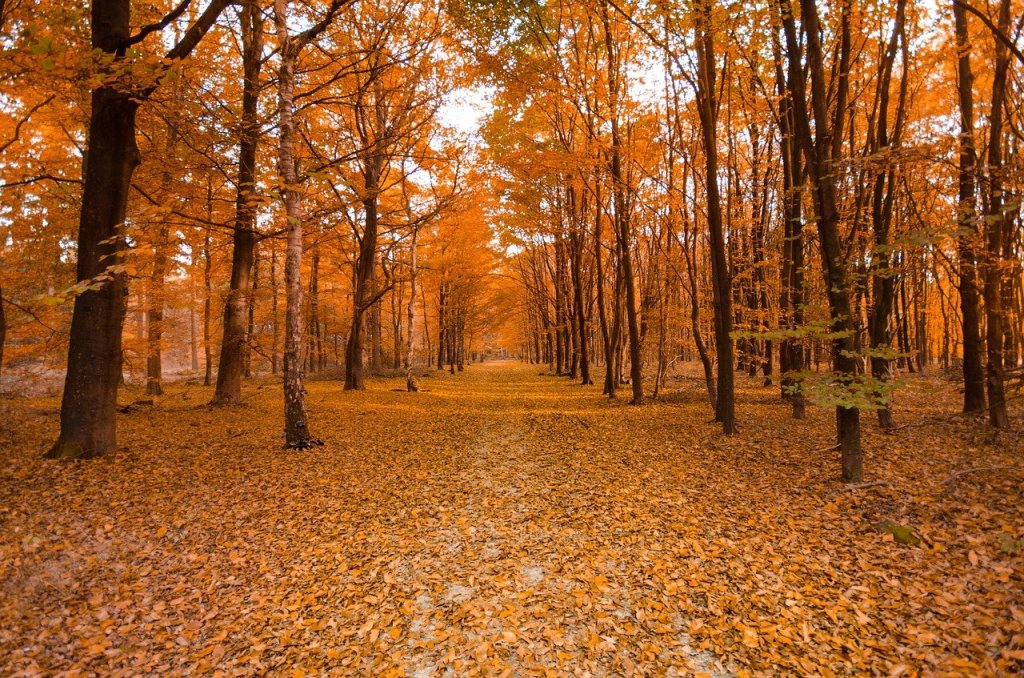 … and it is that time of the year when autumn comes into full swing! We finally trade our summer sandals for boots (completely) and warmer jackets than the month of September. ‘Tis the time for soft woven strands of scarf sit snuggle to our skin, soft and gentle against the crisp, autumn winds. As much as we love summer, it is safe to say that we look forward to autumn, especially the month of October. It is the month we make time for those long walks in crisp mornings to capture the earthly bright hues of yellow and orange, magical autumn splendour.

There are all kinds of fun activities to get into in October, especially one that calls for eerie dress-ups, full moons, pumpkin patches, and autumn spiced foods. So, grab yourself a warm mug of pumpkin spiced latte, get comfortable and read on to find out all about the special presently October has in store for you. 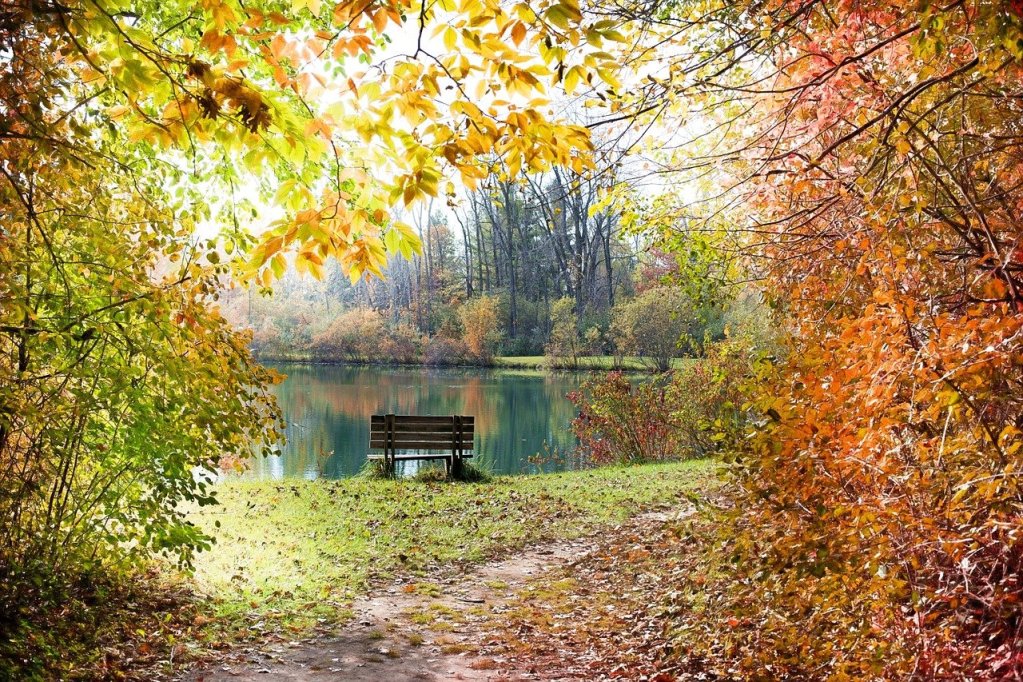 About the month of October

The word ‘October’ comes from the Latin word, ‘Octo’ meaning “eight.” The early Roman calendar started in March, so October was the eight month. Then the Romans converted to a 12-month calendar and the year started in January, with October being the tenth month.

To the Saxons, the month was Wyn Monath, for it was a season for wine making. They also called it ‘Winterfylleth’ meaning Winter Fulness.

To the Welsh, October is ‘Hydref’ which refers to the lowing of cattle.

With autumn dressing herself in bold and vibrant homely hues, of scarlet maple and golden leaves, the season creates a sense of inner calm. Along with special birthstone and birthflower, presently October takes a look at traditions and at some important events such as Octoberfest, Daylight Saving Time, Halloween and special astronomical celebrations.

According to tradition, October’s birthstones are the tourmaline and opal. 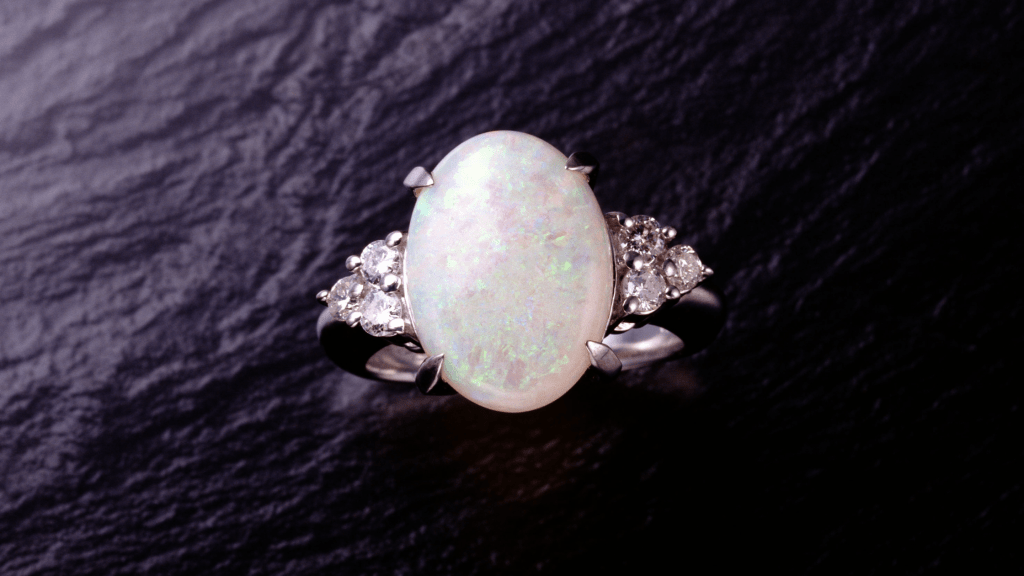 Pictured above is Opal, unique and distinctly in a class by themselves. They are specially delicate, require special care and popularly worn.

This exotic gemstone comes in all shapes, translucent, transparent and in rainbow colours. It is a stone of good fortune, bringing an abundance of wealth, health and happiness.

October birth flower is the Calendula. 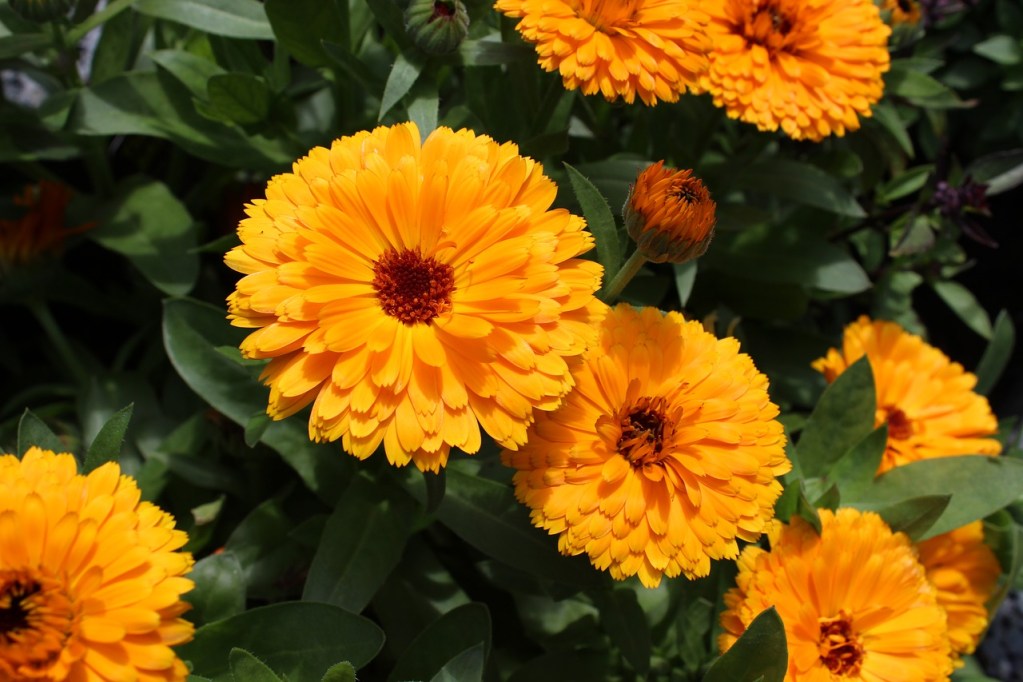 There are about fifteen species to the Calendula family. The bright orange and yellow daisy-like flowers are native to Asia, Central Europe and the Mediterranean. The name has its origin in the Latin word, ‘calendae’, meaning “the first day of the month”.

Since ancient times, the Calendula plant had been used for medicinal purposes. It is known for its anti-inflammatory and anti-viral properties, often used to treat infections.

Back in the 18th century, one Mr William Davis was riding home to Twyford, Hampshire on the evening of October 7. He was suddenly overcome by thick fog and could not see his way home. Just then, he heard the bells of St Mary’s Church ring and realised he was heading in the wrong direction. Mr Davis guided his galloping steed towards the sounds of the bells. They arrived home safely.

Later, he found out that he was only yards away from a deeply dug quarry pit. Had he gone further, he would have been killed.

Mr Davis died in 1754. In his Will, he left a pound for a peal of bells to be rung on each anniversary of October 7 and for a feast for the bell-ringers afterwards. The money ran out a long time ago but the Church continues on with the tradition. The bell-ringers of St Mary’s Church ring the bells twice, at 6:30 a.m. and at 7:00 p.m. on October 7 every year to help travellers find their direction, should they get lost in the fog.

A well in Cornwall is known as a ‘holy well’ and is named after a 5th century Celtic saint, Keyne (Cain Wyry, 461-505). She was the daughter of King Brychan of Brecknock. Keyne dedicated her life to Christianity. Legend has it that she planted four trees around this  well — an oak, an elm, an ash and a willow and imparted strange powers to its waters.

According to the legend, following a wedding, the first of the marriage partners to drink from well’s waters will be the dominant partner.

A well there is in the west country,

And a clearer one never was seen,

There is not a wife in the west country

But has heard of the well of St Keyne.”

St Luke’s Day is special in Christianity. He is the first Christian physician on record. He is the patron saint of artists, physicians, and surgeons.

However, in England, traditionally, October 18 is set aside so girls could gain an insight into their future marriage prospects. For them to see their true love, they have to adhere to some rules.

Before they get to bed, girls will have to put a mixture of spices blended with honey and vinegar on their face. When in bed, they must recite the following rhyme:

In dreams, let me my true love see.

October 1 has traditionally been the start of ‘pudding season’ in England. With the end of harvest and the traditional Michaelmas on September 29, some breeding stock were killed. Some meat salted and kept for winter months ahead, and pudding making were well underway by October 1. The pudding is made with lots of meat, mushrooms, leaks, spices and slow-cooked for a long time, up to 15 hours.

Oktoberfest has its origins as a celebration in honour of the Bavarian royal wedding in 1810. This original beer festival is celebrated in Munich , Germany. It is celebrated with traditional costumes, rides, food and lots of beer tents. The carnival style celebration begins sometime mid September and lasts till the first Sunday in October. Over the years other capital cities has adopted this celebration in recognition of their German community and is a popular event in London. 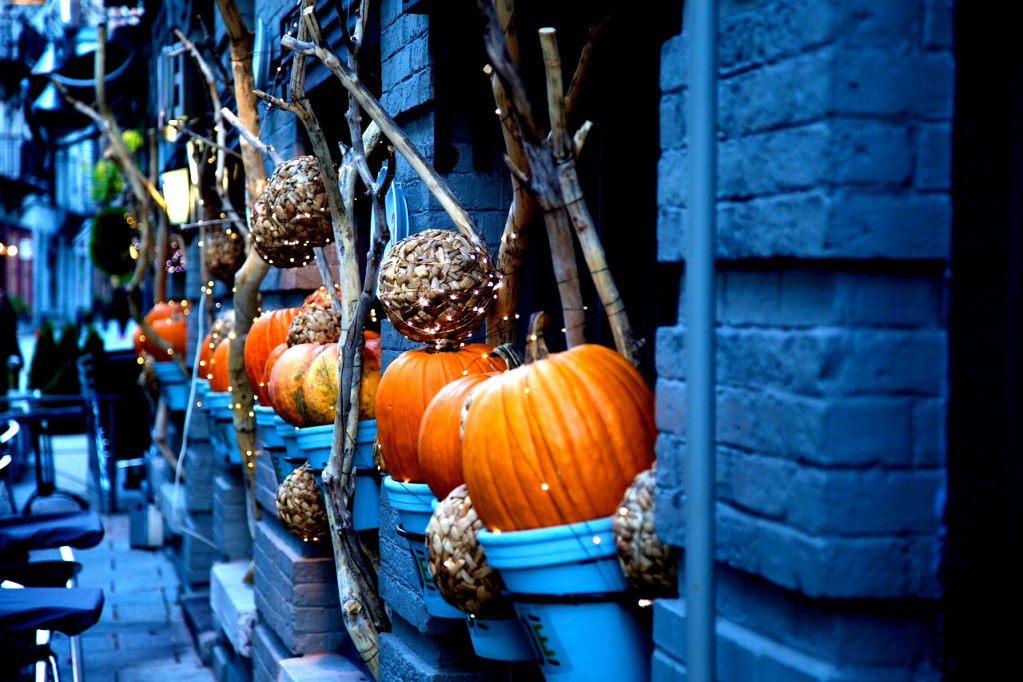 Halloween is a celebration observed in many countries on October 31. The day is said to originate in the Christian calendar, the eve of All Hallows Day. It is a day dedicated to remembering the dearly departed, the saints and martyrs. However, there are suggestions that over time, this Halloween tradition was influenced by folk customs and beliefs from the ancient Celtic harvest festival, Sanhaim.

Samhaim marked the end of harvest and the beginning of the darker half of the year, winter. It was believed that the souls of the dead could return to Earth for one night of the year.

October – all things pumpkin and nice!

With beautiful, bright, warm and charmingly invigorating colours along with legends and Hallowee, October is also exceptional for the special aroma of spices and flavours. A unique combination of cinnamon, nutmeg, ginger and allspice mixed together to create the tantalizing pumpkin spiced latte or pumpkin spiced cake — that little slice of heaven we, as lovers of pumpkin spice savour at this season.

Quotes and Sayings in October

Listen! The wind is rising, and the air is wild with leaves; We have had our summer evenings, now for October eves!”

All things on earth point home in old October; sailors to sea, travellers to walls and fences, hunters to field and hollow, and the long voice of the hounds, the lover to the love he has forsaken”

When berries are many in October; Beware a hard winter.

If the October moon comes without frost, expect no frost till the moon of November.

What happened in September…

Not much writing done in September! I travelled domestically a little. Took to reading and researching some very interesting historical events on the Boleyn family. Managed to publish a few and if you had missed them, here are the articles for September:

Articles to be published in October

That’s a wrap from me for now, till next time. Have a super awesome month of October. 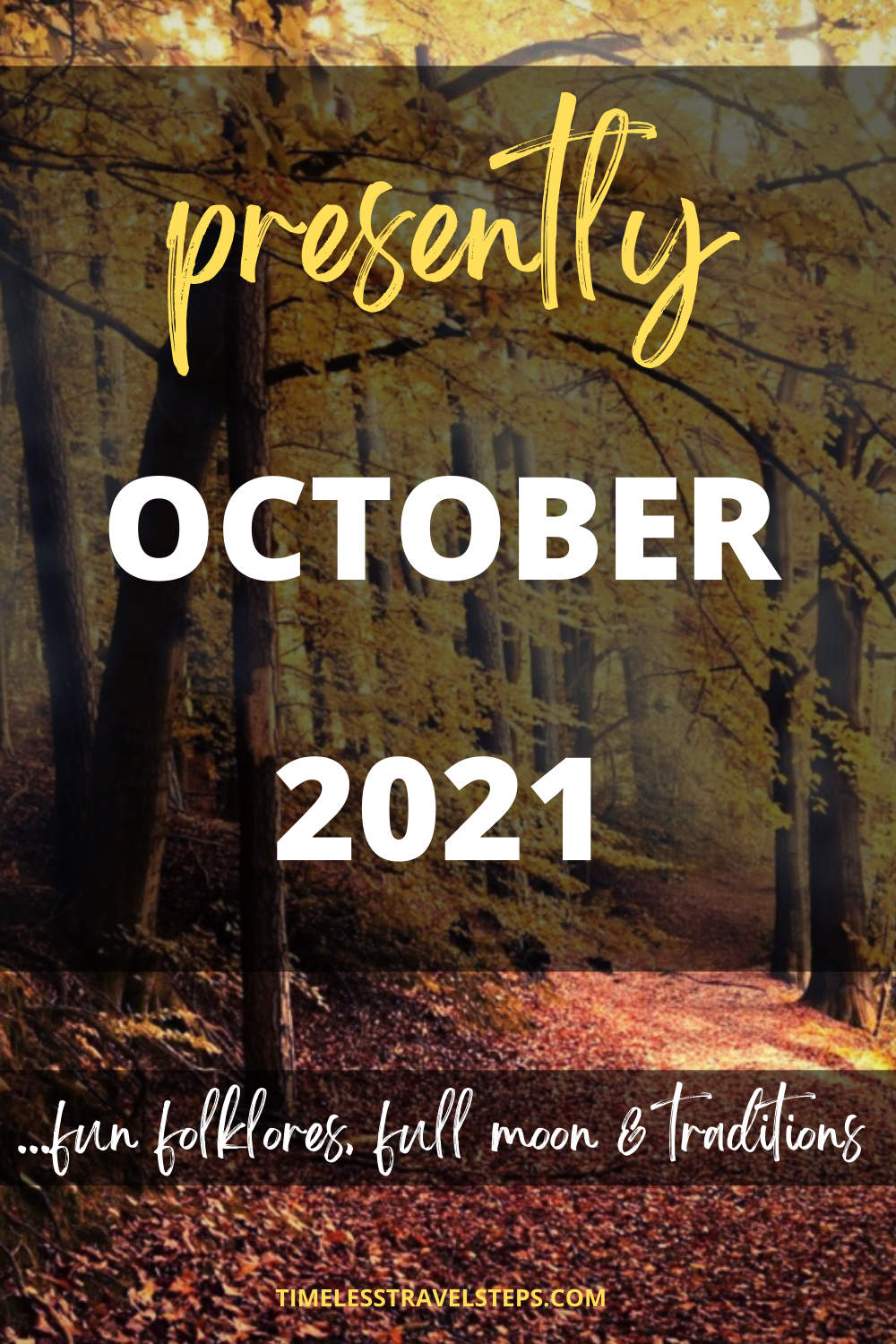