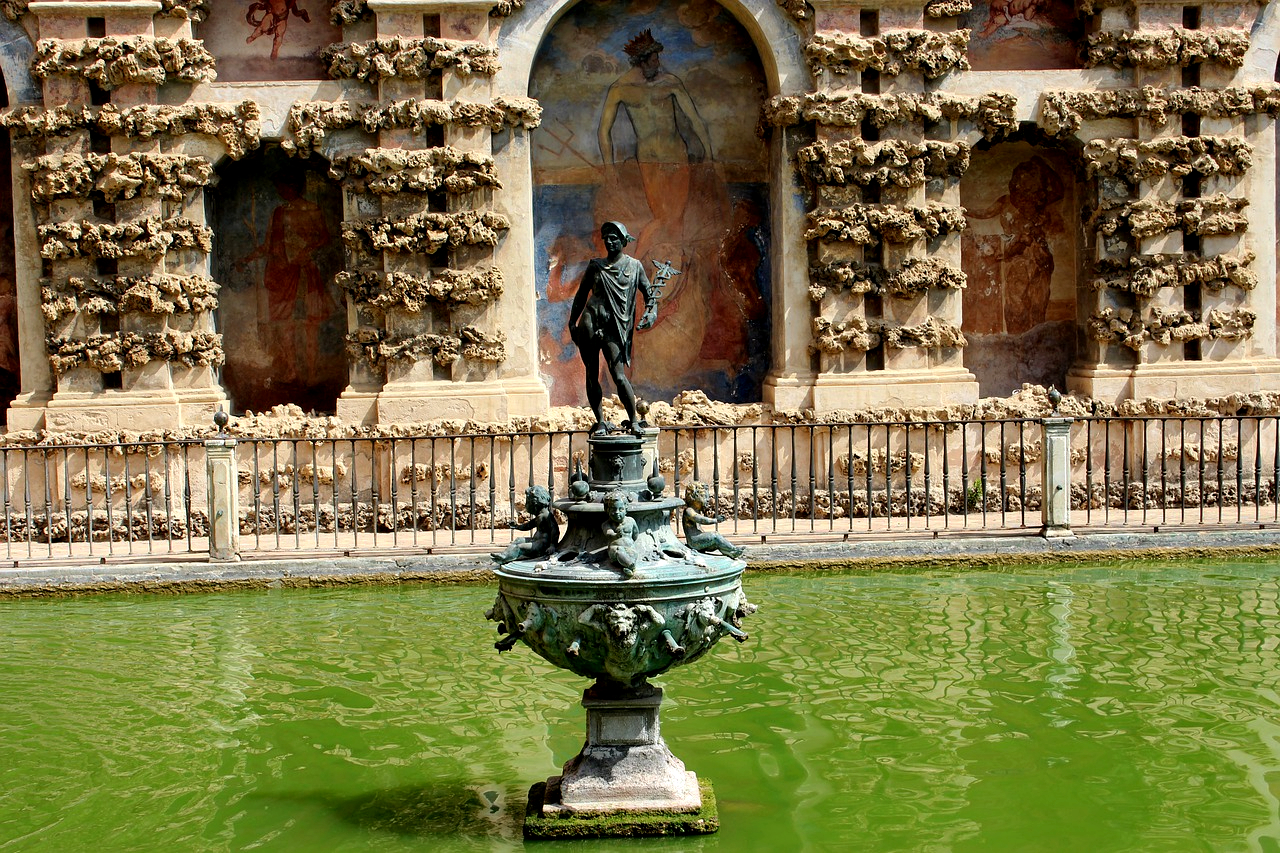 In the midst of evergreen magnolias, fan palms, jasmine and myrtle, wisteria, trees of lemons and oranges is the enchanting Mercury Pond at Royal Alcazar in Seville.

A distinguished destination as a UNESCO World Heritage Site, in the sunny Andalusian capital city of Seville, the Royal Alcazar in Seville is a “must see” attraction for visitors to this part of the Iberian Peninsula in Spain.

Recommended read: The Real Alcázar of Seville | A Guide to the BEST 22 Unmissable Highlights in the Alcázar Complex

About The Mercury Pond at Royal Alcazar

The enchanting Mercury Pond at Royal Alcazar was built at the height of the palace. Therefore, it is located at the highest point of the gardens at the Royal Alcazar of Seville, thus giving visitors a strategic vantage point of a broader perspective of the surrounding gardens. It is usually the first point from whence you would begin your garden walk at the Royal Alcazar.

The Mercury Pond is a large pool with a fountain filled with fish. Formerly it was a storage point supplying water to the palace brought from Carmona, a town on the outskirts of Seville. Water crashes from a spout about eight metres high from the upper building into the basin below. The Pond takes its name from the bronze statue, a Renaissance addition. It is also famously known as Garden of the Pond.

Accenting the pond is a statue of the Greek god, Mercury, a deity of industry and commerce. The bronze statue was sculpted in 1576 and have been credited to Diego de Pesquera and Bartolome Morel. Surrounded by railings, figures of lions holding shields at the angles and 18 balls with pyramidal spikes.

The Mercury Pond was important to King Philip V. It was at this very pond where the king would listen to the famous Italian singer, Farinelli until late/early hours of the morning.

Backdrop to the Mercury Pond is Galleria de Grutesco.

Behind the Mercury Pond is a long wall of 160 metres that runs northwest-southeast direction which make up the Galleria de Grutesco (Grotto Gallery). The wall is covered with a series of various stones, plastering and frescoes of classic mythological scenes together with some Renaissance paintings. The original foundation to the Galleria de Grutesco (Grotto Gallery) dates to the 12th century when the Almohad were rulers of Seville. Then, the wall was built as a defensive wall against flooding of the Tagarete River. However, in 1612, the architect Vermondo Resta set out to transform and built upon the defensive wall into a Grotto Gallery. The work continued into the 19th century, giving the wall an appearance it has today.

It has an upper corridor, all through the 160 metres via some narrow steps. The views from the upper gallery over the gardens of the Royal Alcazar are incredible, one not to miss.

How to visit the Mercury Pond at Royal Alcazar Seville

The Royal Alcazar in Seville is a very popular attraction and the waiting time to purchase a ticket and entry can run into hours. In addition, there is a capacity limit of 750 visitors a day. So , if this limit is reached, it is reached! You may have to return on another occasion to experience the Royal Alcazar. To avoid disappointment, you could book your tickets with alcazarsevilla. org or you may wish to combine your visit to other attractions in Seville on a skip-the-line guided tour tickets.

Skip the Line Ticket to the Real Alcázar of Seville

26 Very Best Places to stay on the Isle of Wight

People & Culture of Italy | An Overview

Getting around Milan like a local: Guide to Milan’s public transportation

When is the best time to go to Italy?

Essential Information on the Real Alcázar of Seville :

UNESCO World Heritage Site along with Seville Cathedral, & General Archive of the Indies.

Essential Information you need to know before your visit:

The Palace has a maximum capacity of 750 visitors. When it is full, it is full! Waiting times can be extremely long during peak times. Avoid the queues, save time and book ahead your skip-the-line tickets.