The mystical, infinite arches, the alluring reflections in the waters and the fresh air in its atmosphere at the secluded Baths of Maria de Padilla is an obligatory stop to seek out when visiting the Alcazar complex in Seville.

This post aims to give you an overview of the famous serene and secluded Baths of Maria de Padilla at the Royal Alcazar, who Lady Maria was and the love between the King and her. After reading this post, I sincerely hope you will visit the famous Baths.

The Baths of Maria de Padilla ( Baños de Doña María de Padilla) were made famous by a legend associated with Lady Maria de Padilla, a noble lady and mistress to the King of Castile, Pedro I the Cruel.

Located within the grounds and in a secluded basement at the Royal Alcazar in Seville, Andalusia is the famous Baths of Maria de Padilla. The Baths of Maria de Padilla is no regal baths at all. They are stone water cisterns built in the 12th century by the Moors to collect rain water which was supplied to the palace as drinking water. It was an area to shy away from the summer heat and served as a food storage area also.

1.1 | Legend of the Baths of Maria de Padilla

Legend has it that the beautiful Lady Maria de Padilla, walked naked through the palace and bathed in the water cisterns to cool off from the scorching heat. The stone cisterns were coated in lime. Thereafter, King Pedro I the Cruel is said to offer the palace water in which Maria de Padilla bathed as a drink to his guests. Visitors drank the water for an audience with the King.

The secret Baths of Maria de Padilla is an alluring sight and one of the most picturesque places within the Mudejar palace complex.

A spacious ‘room’ located below the Patio del Crucero are stone water cisterns which were originally built during the Almohads reign in the 12th century. The stone walls were coated with lime and rain water were collected here before it was used as drinking water by the palace residents. Later additions were made to the ‘room’ by King Alfonso X in the 13th century. He added Gothic rib vaults during the latter part of 13th century. It was accessed by a barrel vault that led to the Garden of the Dance.

Following the Lisbon Earthquake in 1755, it became necessary for the Mudejar palace to undergo further modifications. The cisterns which were open to the gardens became an underground vault along with lateral corridors. The corridors were decorated with Renaissance paintings from the 16th century. As a result of its ‘underground’ location, the crypt is said to have a temperature of 15 degree Celsius lower than the outside and goes with the reputation of being the coolest place in Seville!

1.3 | The Baths of Maria de Padilla is an unmissable experience

Visiting the Baths of Maria de Padilla today is an experience not to miss. The tranquility it bestows as soon as you venture through the corridors is augmented with the fresh air in the atmosphere. The beautiful vaulted Gothic arches seems endless. This vaulted crypt is divided into three naves with noticeable lateral ones being smaller than the central. The reflection of the arches off the water and the gentle natural light seeping through the sides makes this stop somewhat dreamlike and surreal.

Georgina suggests: For many, the Baths of Maria de Padilla is a quick photo-stop but I encourage you to spend a few moments here to appreciate the ingenuous architecture and experience the mystical and serene atmosphere that is characteristic of this medieval hidden gem.

The King of Castile, Pedro I the Cruel was madly in love with the dazzling Lady Maria de Padilla but the irony is that they were never married.

King Pedro I met Lady Maria de Padilla in the summer of 1352. Their affair began almost immediately even though the King was betrothed to Blanche de Bourbon, the daughter of Duke Pierre I of Bourbon. The King was very much in love with Lady Maria and he abandoned his wife three days after his wedding. He took Lady Maria as his mistress and brought her to live at the royal palace. The King also found out that his wife had an affair with his stepbrother, Fadrique Alfonso and he sent her off to be imprisoned at his mother’s palace, the royal fortress in Toledo.

Lady Maria de Padilla was the daughter of the Castilian nobles Juan Garcia de Padilla and Marie Gonzalez de Hinestrosa. She held her own court at the palace. King Pedro I and Lady Maris had four children, three daughters and a son.

Following the death of Lady Maria de Padilla, King Pedro I asked the Arcbishop of Toledo to annul his previous marriages and declare that Maria was his first and only wife, thereby officially pronouncing Maria as queen posthumously. With this decree, it allowed the King to legitimise all of his four children with Maria. Lady Maria is buried at the Royal Chapel in Seville Cathedral. King Pedro I was buried alongside Lady Maria in 1369.

3 | The Mudejar Royal Alcazar in Seville

The Baths of Maria de Padilla is only one of the very many interesting stops to seek out when visiting the breathtaking Mudejar palace complex in the heart of Seville. The Royal Alcazar is the oldest royal palace in Europe in use and offers a walk through history and unmissable architectural marvels.

King Pedro I built an impressive addition to the Alcázar palace complex — Pedro’s Palace between 1364 and 1366. An incredibly outstanding architecture of Mudejar style, the Alcazar is one of three monuments jointly made the list of UNESCO World Heritage Site.

If you are a passionate fan of the HBO series, Game of Thrones, you will instantly recognise that the Royal Alcazar of Seville was the backdrop to many scenes. In particular, the Baths of Maria de Padilla was featured as House Martell in the 6th season of the series.

4 | How to Visit the Baths of Maria de Padilla

4.2 | Essential Information on the Real Alcázar of Seville :

UNESCO World Heritage Site along with Seville Cathedral, & General Archive of the Indies.

4.3 | Essential Information you need to know before your visit:

The Palace has a maximum capacity of 750 visitors. When it is full, it is full! Waiting times can be extremely long during peak times. Avoid the queues, save time and book ahead your skip-the-line tickets.

Skip the Line Ticket to the Real Alcázar of Seville

Alcazar and Cathedral + Giralda of Seville

Alcazar and Cathedral + Giralda of Seville

OUR BEST SELLING ACTIVITIES FOR SEVILLE

1 | For an all-round experience of the sultry city, opt for a food walking tour 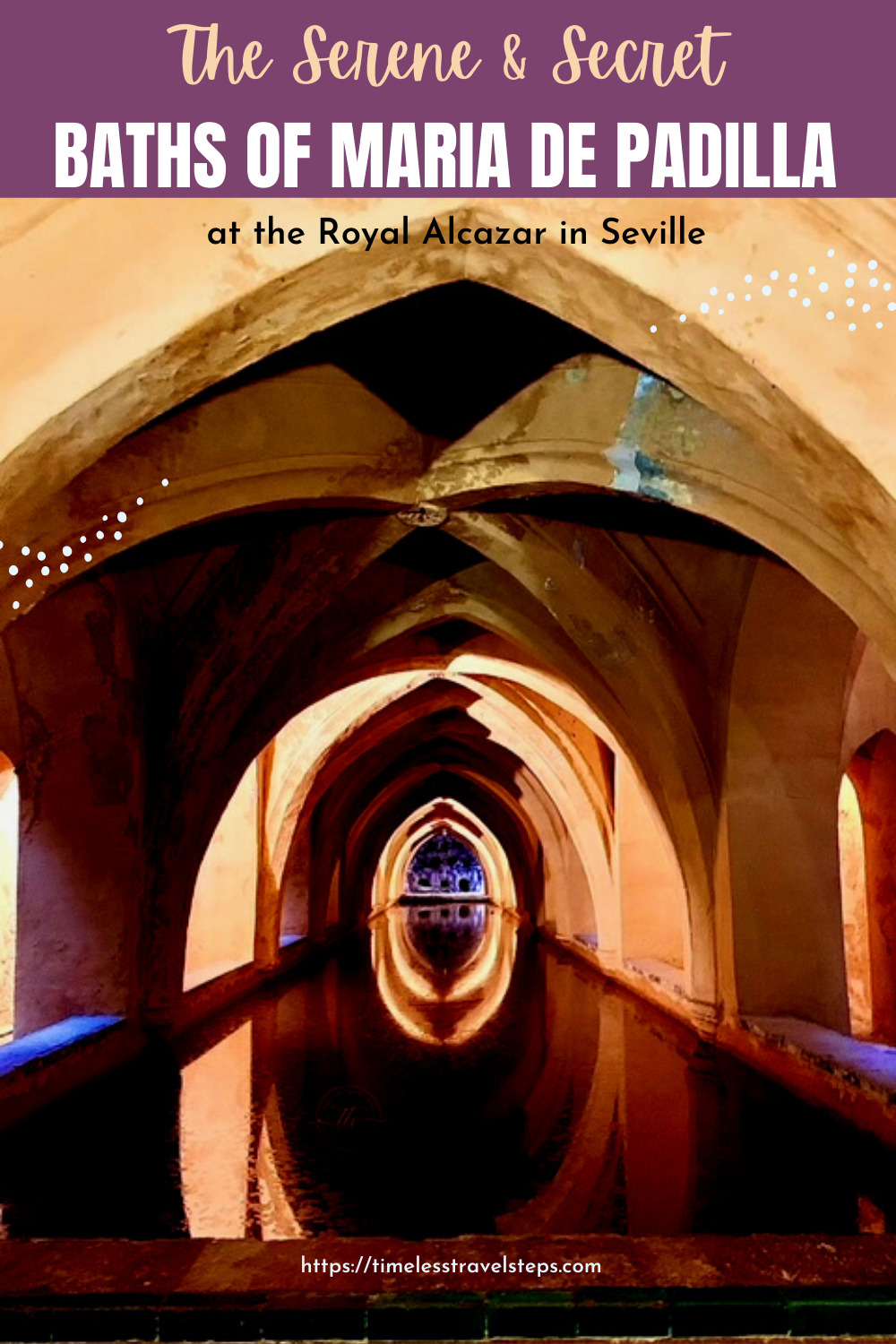