Looking for the best funny puns and quotes about Budapest to inspire your journey or some examplary captions for those very special photos on social media?

Welcome!! In this post, you shall find 65 of the very best puns and quotes about Budapest, the capital of Hungary, once known as Queen of the Danube that you shall absolutely love.

I recently visited Budapest where I spent almost a week and let me tell you, the capital of Hungary is one of charm and splendour. Unlike the larger cities of Milan or Paris and often overshadowed by its neighbours, Prague and Vienna, Budapest stands alone representing unique monuments and a complex past. From medieval monuments to fairytale settings, and rustic ruins to opulance, Budapest offers many reasons for a visit. It is a gorgeous city that you will fall in love with.

Budapest is one of the most beautiful cities I have visited and I share some of the amazing words used to describe this city by all those who had experienced this Queen of the Danube.

The city has enchanted authors, travellers, and creative souls for centuries, inspiring some truly funny puns and beautiful quotes about Budapest that captures the essence of the city by the River Danube. In this post, you shall find some of the very best puns and quotes about Budapest to inspire your journey, or captions to accompany your beautiful photos on Instagram, Facebook or other social media platforms.

If you can’t read now, Pin Quotes about Budapest to read later!

This post and all related posts are sprinkled with affiliate links. We may earn a commission from qualified purchases at no cost to you at all. Thank you for supporting Timeless Travel Steps

Here are my favourite top 65 funny puns and quotes about Budapest, compiled just for you. The collection below includes inspiration from poems, songs, films, literature and famous Hungarian authors.

Let’s begin with my top favourite quote on Budapest, by Bourdain:

1 | ‘They said that, of course, Budapest is beautiful. But it is in fact almost ludicrously beautiful.’ — Anthony Bourdain, Chef, Author and Travel Documentarian

Truly, you only need to visit Budapest once to know just how beautiful the city is!

Let’s take a look at more quotes about Budapest and what the travellers say:

2 | ‘This is where I came in. Budapest: where East meets West. The Blue Danube is something more than a waltz by Johann Strauss.’ — Paul Kelly as Tom Kelly in Guilty of Treason

3 | ‘But if you go from Moscow to Budapest you think you are in Paris.’ — Gyorgy Ligeti, A Hungarian-Austrian composer of contemporary classical music.

4 | ‘Budapest is a prime site for dreams: the East’s exuberant vision of the West, the West’s uneasy hallucination of the East. It is a dreamed-up city; a city almost completely faked; a city invented out of other cities, out of Paris by way of Vienna — the imitation, as Claudio Magris has it, of an imitation.’ — M. John Harrison, Author, The Course of the Heart

5 | ‘Straddling the Danube River, with the Buda Hills to the west and the Great Plain to the east, Budapest is a gem of a city.’ — Lonely Planet, An Australian Travel Guide Book Publisher

8 | ‘I love Budapest for all the right reasons — architecture (especially art nouveau), romance (particularly the views from the bridges) and sticky apricot jam — and some wrong ones, too — killer pálinka (fruit brandy), rickety trolleybuses, and spending way too much time in the Turkish baths.’ — Lonely Planet

9 | ‘Where would you like to go, what would you really like to do with your life? See Istanbul, Port Said, Nairobi, Budapest. Write a book. Smoke too many cigarettes. Fall off a cliff but get caught in a tree halfway down. Get shot at a few times in a dark alley on Morrocan midnight. Love a beautiful woman.’ — Ray Bradbury, Author, Dandelion Wine

Budapest is famously known as the capital city of thermal baths and thrives on its spa culture. The city sits on a fault line and is fed by natural hot springs. Budapest has nine thermal baths and one-hundred-twenty-three hot springs. Each bath is unique. It is worth experiencing one of the dozen or so impressive thermal baths. The Széchenyi Thermal Bath is the most popular and is 109 years old.

10 | ‘One thing that hasn’t changed through the years is the Hungarian affection for taking the waters — marinating in thermal baths. A tradition going back to the Romans continued by the Ottomans and something that survived through two wars and communism. And they do it in style.’ — Anthony Bourdain

11 | ‘In Budapest, you’ll find experiences like nothing else in Europe: Feel your stress ebb away as you soak in hundred-degree water, surrounded by opulent Baroque domes and by Speedo- and bikini-clad Hungarians. Ogle some of Europe’s most richly decorated interiors, which echo a proud little nation’s bygone glory days.’ — Rick Steves, An American Travel Writer

12 | ‘Budapest in late May is a city of lilacs. The sweet, languid, rather sleepy smell of lilacs wafts everywhere. And it is a city of lovers, many of them quite middle-aged. Walking with their arms around each other, embracing and kissing on park benches. A sensuousness very much bound up (it seems to me) with the heady ubiquitous smell of lilacs.’ — Joyce Carol Oates, Writer

13 | ‘Budapest intrigue, three hours of black and white, squinting at subtitles through a telescopic sight, Hungarian melody, repeating endlessly, is this the end I see? Approaching in front of me.’ — Elvis Costello, Singer, Songwriter

14 | ‘Europe’s most underrated big city, Budapest can be as challenging as it is enchanting.’ — Rick Steves

15 | ‘In Budapest, I always had questions. What is your signature dish? They, of course, said goulash. I loved it so much and now have to figure out a way to make it at home.’ — Tia Mowry

16 | ‘Of course, it’s not all foie gras and fine wines. There are other pleasures, just as awesome. Maybe, maybe even more awesome.’ — Anthony Bourdain

18 | ‘A chest with no breath creeping through darkness, An iced game of chess melting in Budapest. Building a gambling house in my head, near the castle, a cold hunter lays, In Budapest.’ — Poni Hoax, French Musical Group

19 | ‘Some people come seeking a cure for whatever ails them, but the majority are there for fun and relaxation — though we still maintain it’s the world’s best cure for what Hungarians call a Macska-jaj (cat’s wail) — hangover.’ — Lonely Planet

20 | I’ve done drives through Budapest and Oslo and used to drive to Sardinia, too, which is quite a journey. Drives are an adventure because I don’t plan them too carefully. I take detours depending on how I feel and usually stop and stay at places I like the look of. — Rick Astley, Singer Songwriter

21 | ‘But best of all I loved the Castle Hill District of Buda. I never tired of its ancient streets. Even in those days old things attracted me more than new ones. For me the deepest truth was found only in things suffused with the lives of many generations, which hold the past as permanently as mason Kelemen’s wife buried in the high tower of Deva’. — Antal Szerb, Hungarian Writer.

CAPTIONS ABOUT BUDAPEST FOR YOUR PHOTOS

25 | ‘Want to go away with me? To the lakes, or to Budapest?’ — Olaf Lubaszenko as Tomek in A Short Film about Love

26 | ‘I told them they’d see me walking in the rain in Budapest.’ — Mary Chapin Carpenter, Singer (Album: The Age of Miracles)

27 | ‘Might head to Budapest just to get a Gucci vest.’ — America Lyrics by Casey Veggies from the Macadelic album.

28 | ‘Never been to Budapest, Every day’s a Buddha fest’ — Styles P, An American Rapper

31 | ‘I got an iced out crucifix, Fans means Budapest, I don’t speak that language, but they say it means, you are the best.’ — Future Brown, American Band

32 | ‘And we partyin’ from Brooklyn all the way to Budapest, so I’ ma do me, you can do the rest.’ — Hoodie Allen, An American Rapper, Singer and Songwriter

33 | ‘Nighttime in Budapest, So many people are waiting in line, Darkness without a glow, What a night to be watching the Christmas show.’ — King Diamond in The Puppet Master (song)

Looking for some puns and funny quotes about Budapest? Here are some of the top ones for you to use as fun captions to accompany your photos on social media.

37 | ‘I was Hungary, so I went on a dinner cruise to check out the Buda-ful view’

38 | ‘I wanted to take a picture of Fisherman’s Bastion, but I couldn’t find the right angler’

40 | ‘I think I just Nighttimedapest day of my life’

49 | ‘The food in Hungary is Stewpendulous’

53 | ‘This River Cruise is very relaxing. I’m just going with the flow’

55 | ‘I’m still Hungary for the sights in Budapest’

If you love quotes about Budapest, you may like these as well:

Edinburgh City Quotes and Captions | Awesome 18 to Grow your Instagram

Quotes on Milan that makes the City Irresistable

Halloween – Best 55 Quotes, Captions and Sayings for that Creepy Vibes in October 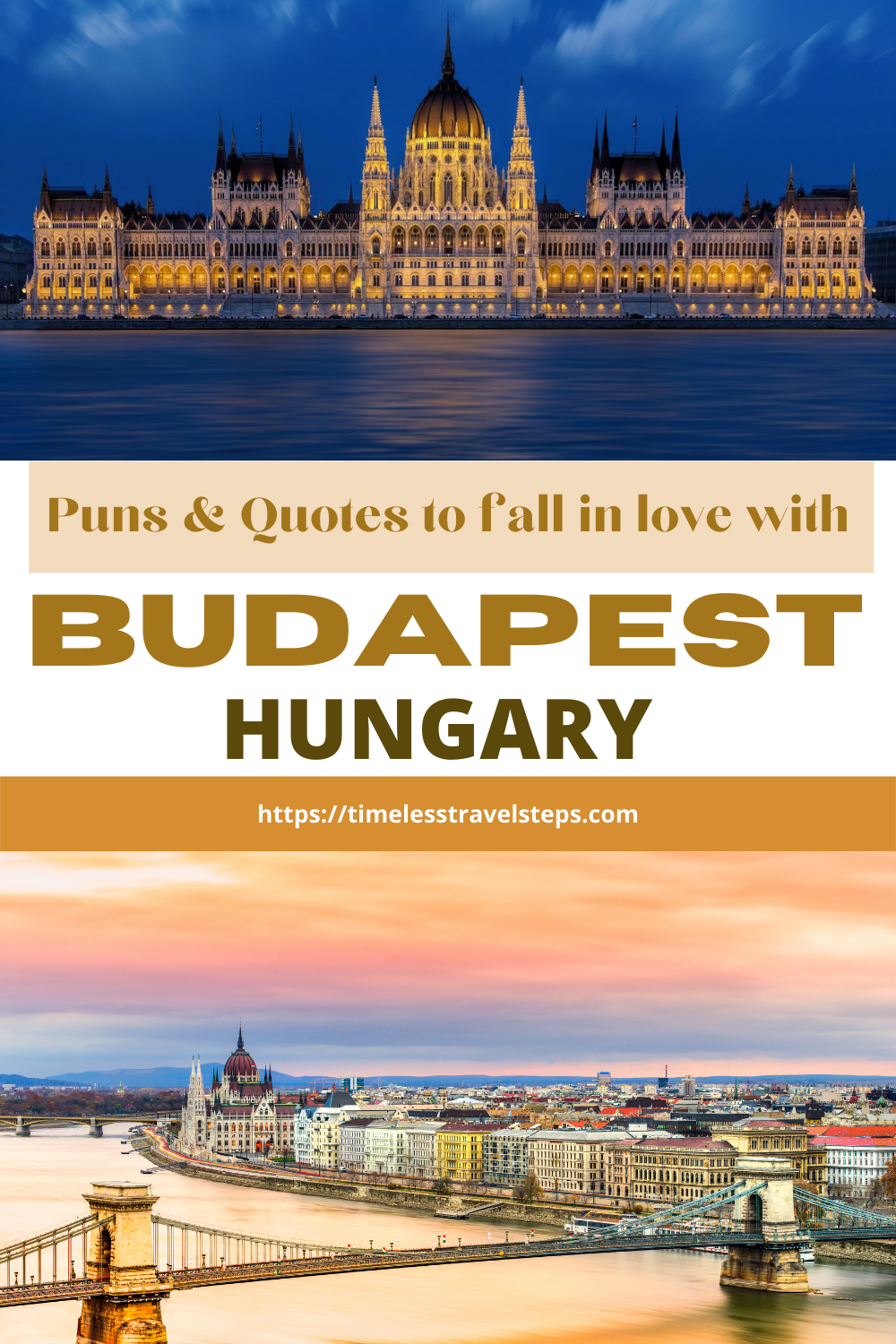