The Queen’s House in Greenwich, unlike other buildings with the name “Queen’s House,” really is  a historic royal house which served as a former royal residence, Greenwich Palace, where Elizabeth I was born. It was built between 1616 and 1636 and was designed by the famous architect, Inigo Jones. Jones was inspired by his travels in Italy. The Queen’s House was the first classical building in England and one of the very few surviving designs of Inigo Jones.

Queen’s House Greenwich | How did it begin?

It all began when James I gifted the building to his wife, Anne of Denmark, by way of an apology for swearing in her presence because she shot one of his favourite dogs whilst hunting. Work on the building commenced in 1616 but halted in 1619 when Anne of Denmark died, with only the first floor completed. Work on the house  continued again after some years in 1629, when Charles I gave Greenwich to his wife, Henrietta Maria. The House was finally completed in 1636.  Additional wings to the building were linked by colonnades built in 1807.

Today, you can wander around this magnificent building for Free which has undergone massive restoration in recent years and imagine what life would have been like all the way back in the 17th century. The building is Grade 1 listed and is an ancient monument and includes the 35 metres (115 feet) axial vista to River Thames.

Why you should visit the Queen’s House Greenwich

There are many reasons to visit this iconic building, which is also referred to as the “House of Delight.”  It has a wealth of history, all 400 years and legend has it that it is also a “haunted” palace.

This House of Delight has a beautiful art collection for you to view and gain insight into. The art collection spans through the ages especially the iconic Armada Portrait of Queen Elizabeth I which was acquired for the nation in 2016. You will also discover the many stories of England’s past from Henry VIII to Elizabeth I to Charles I and beyond including the history of its architecture.

Guided tours are available throughout the day for you to join. For now, come along with me as I share with you my discoveries of this iconic building.

This iconic building painted in white was impressive from the outside and it is hard to believe that it was once a red-brick building.

Walking into the building, I began to realise the magnificence of the architecture …

Standing in the midst of this cubic masterpiece, at first glance looking up, you will notice a simplistic and a beautifully decorated ceiling in gold leaf. It reflected painstaking craftmanship of an intricate and unique design that goes well with the rest of the interior of the House.

I understood from the tour guide that the design was crafted by Richard Wright, a Turner Prize winner. The delicate and ornate work began in 2016 and was completed in nine weeks. This was the first time the ceiling had been worked upon since 1639.

The original decoration of the ceiling were six paintings by Orazio and Gentileschi which were removed very carefully and now belongs to Marlborough House in London.

The Great Hall is the heart of the building. From the first floor gallery, you get a closer view of this incredible architecture.

2 | Views from the first floor gallery of Queen’s House

Although the Great Hall is the centrepiece of the Queens House, a walk through the first floor gallery gives you spectacular views of the exterior. On one side, there is a view straight to the Thames! Queen Mary II ensured that there was uninterrupted view of the Thames and that the closest distance between the College Buildings, situated over the road is exactly the width of the House, see the below photo. Wasn’t she a smart woman!

Then, on the other side of the first floor gallery square, you get the view of the Royal Observatory, high up the hill, across the Royal Park.

The Tulip Stairs is definitely unique! You need to see it to know what I mean. This magnificent ornate, wrought iron structure is one of the original features of the House. It is the first geometric self-supporting spiral stairs in Britain. The paint, which is a quirky shade of blue is unique, because it was derived from crushed glass.

The Tulip Stairs is also popular for another reason which has contributed to the Queen’s House reputation as the House of Delight.

The Tulip Stairs was where the photos taken by Rev Hardy in 1966 showed two or three shrouded figures on the staircase.

[Later sightings of ghosts was in 2002 in the balcony of the House].

This incredible feature of the Queen’s House is on the first floor. The space, used as a public-facing identity was where the Queen would meet her courtiers.

The opulent ceiling of this room dates from early years of Henrietta Maria when it was used as her bedchamber. The bed was positioned directly under the coat of arms on the ceiling.

The ceiling is ornately painted, and the artwork is another original feature of the Queen’s House. It gives an idea of how this House was decorated and filled with art in the 1630s by Henrietta Maria. This ceiling was restored in 2013.

The fireplace in this room is an interesting feature. Above the fireplace, sits the initials of Charles I and Henrietta Maria Regina.

In addition to these two incredible original features of the House, the infamous Armada Portrait is on permanent display in this room.

5 | The Armada Portrait of Elizabeth I

The iconic “Armada Portrait” was painted after England defeated the Spanish Armada in 1588. The portrait was owned by the descendants of Sir Francis Drake. Drake was a sea captain and a pirate who fought against the Spanish invasion.

The Armada Portrait of Elizabeth I is a statement of her power as a monarch who was only the second English queen to rule in her own right.

5.1 | The features of the Amanda Portrait

There are three distinct features of this Portrait:

Queen Elizabeth 1 was a virgin queen at the age of 55, at the time of the Armada Invasion in 1588.  The portraits during this period became known as “Mask of Youth” because the Queen appeared idealised, ageless and invulnerable, created to portray her intellect, innocence as well as her strength and charisma.

The picture above is of an animatronic mask displayed opposite the Armada Portrait created by Mat Collishaw, a contemporary artist. Drawing information from various sources, he had created this mask to portray how Elizabeth I may have looked when the Armada Portrait was created.

My thoughts on Queen’s House Greenwich

My visit to Queens House was a rewarding experience because I learnt more about its history than I had read. Listening to information from experienced tour guides allows me to remember more, somehow. I had time to admire the architecture at leisure. I found the tour guides extremely helpful and I enjoyed my conversations about the House with them. Although a donation is recommended, the entry itself is free. I would highly recommend a visit to this iconic building.

At the base of the Tulip staircase – Toilets, baby-change facilities and an accessible toilet.

I hope you have enjoyed “viewing” Queen’s House Greenwich with me and sincerely wish that this post is valuable to you for when planning a visit to Greenwich, London? If so, let me know in comments below or via Contact Form. I would love to hear from you. 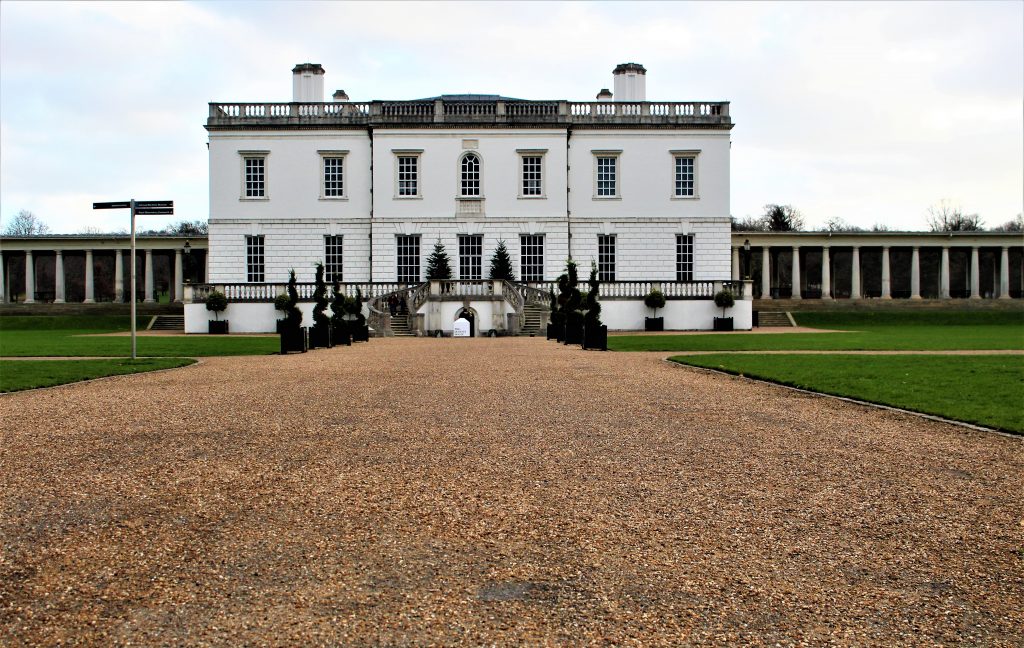 I like the spirit of this great London which I feel around me. Who but a coward would pass his whole life in hamlets; and for ever abandon his faculties to the eating rust of obscurity? 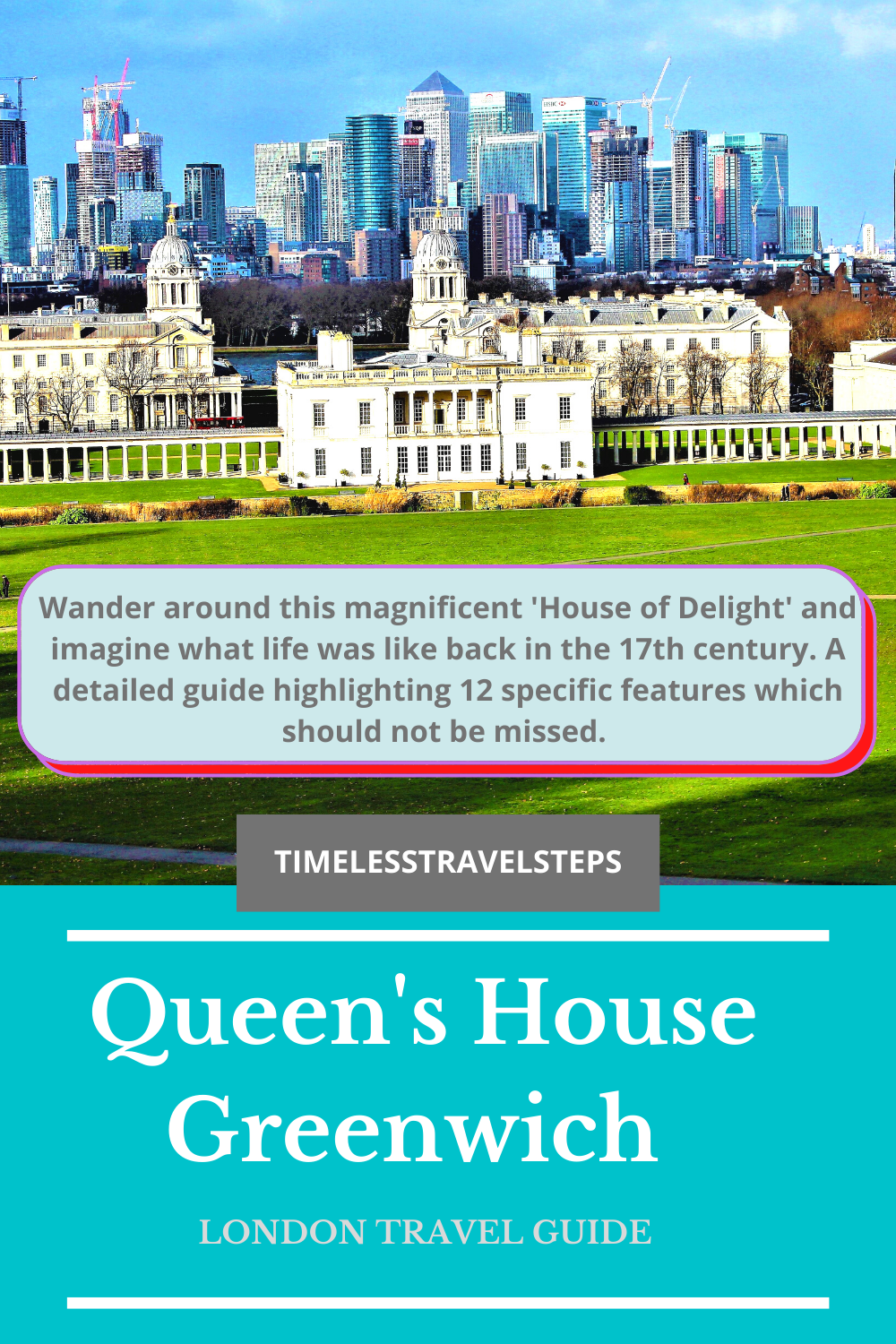