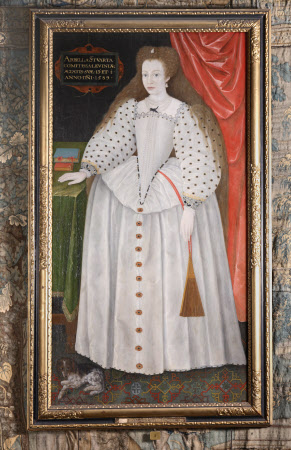 Researched and Written by: Georgina | We may earn a commission from affiliate links at zero costs to you | Updated: February 22, 2022

About four centuries ago, a princess lay dying within the walls of London Fortress, yearning for her freedom to be with her husband, reflecting on her life that would have been, if only… Lady Arbella Stuart was an English, born of royal blood who had a better right to be the Queen of England than her Scottish cousin, James VI, succeeding Queen Elizabeth I. Sadly, she became one of the royal prisoners at the Tower of London and over time, forgotten.

The following is what we know of the little known uncrowned queen, Lady Arbella Stuart who would have changed the course of history.

Planning a visit to the Tower of London?

The following two articles will help you decide on the best ways to visit the grand historic Tower of London:

7 Best Ways to Visit the Tower of London

Visit the Tower of London with the best value London Pass

Who was Lady Arbella Stuart and her right to the throne?

Lady Arbella Stuart was born in 1575 and was the possible successor to Queen Elizabeth I.

Charles Stuart was the younger son to Matthew Stuart and Lady Margaret Douglas, daughter and heiress of Archibald Douglas, 6th Earl of Angus and of Margaret Tudor, eldest daughter of King Henry VII.

Therefore, Lady Arbella Stuart was the great-great-granddaughter of King Henry VII and was in line of succession to the throne.

Charles’ older sibling was Henry Stuart, Lord Darnley who became the second husband of Mary, Queen of Scots and father to James VI of Scotland.

So, in a nutshell, born into the Stuart family, Arbella was niece of Mary Queen of Scots , cousin to James VI of Scotland, and a distant cousin to Queen Elizabeth I of England.

Lady Arbella Stuart had many misfortunes in her life from the time she was an infant. Arbella’s father, Charles Stuart died in 1576 when she was barely two years old. Upon the death of her father, Arbella was meant to inherit the title “Countess of Lennox” along with all the Lennox lands in Scotland but she was denied her inheritance. The Scottish government seized the lands on the premise that as King James was still a minor he could not grant the title. Moreover, their reasoning also centred on the fact that Arbella was English by birth and therefore her claim on the title was invalid.

This unjust reasoning and decision drew the attention of the monarch and Queen Elizabeth herself wrote to the Scottish regency government asking for Arbella to be given her inheritance but nothing came of it. Over the years, Lady Arbella Stuart referred to her lost lands on many occassions but she was never formally granted the title of Countess of Lennox.

In addition, Arbella was due inheritance from her paternal grandmother, Lady Lennox – jewels set with a diamond, a ruby and an emerald with a great pearl.  However, more misfortune was set her way. The entrusted guardian of Lady Lennox who should have handed the jewels over to Arbella failed to do so. Instead, the steward fled to Scotland where the jewels ended up with King James himself!

After the passing of her father, Lady Arbella Stuart was raised by her mother, Elizabeth Cavendish, Countess of Lennox. Unfortunately, her mother passed away as well in 1582, leaving Arbella an orphan at the very young age of just seven. She became the ward of her maternal grandmother, Elizabeth Hardwick, better known as the formidable “Bess of Hardwick” and went to live in Hardwick Hall.

Within the protection of Hardwick Hall, Arbella received education fit for a princess. Proving herself as an able pupil, Arbella learnt philosophy, became an accomplished musician, and was fluent in Latin, Greek, French, Italian and Spanish. She visited London and the royal court periodically in the summers of 1587 and 1588. There was one visit that lasted from November 1591 to July 1592.

She impressed Queen Elizabeth on her first visit and the Queen was noted as saying the twelve-year old Arbella may one day be Queen of England. However, with the execution of Arbella’s aunt, Mary, Queen of Scots and the possibility of the Spanish Armada, Arbella returned to the relative safety and protective isolation of Hardwick Hall in Derbyshire.

The ensuing years were frustrating ones for Lady Arbella Stuart. As her grandmother spent her time designing and building Hardwick fit for a queen, Arbella felt increasingly isolated. Often talked of as being a suitable bride but she never came close to marriage, thereby prompting her to plot her own marriage. Stories of Arbella and her affairs circulated widely, so much so that in winter 1602-1603 the Queen herself sent her trusted courtier, Sir Henry Brounker to Hardwick to investigate the matter. Bess pleaded with the Queen to let Arbella leave but Elizabeth disagreed. The Queen ordered Arbella to remain at Hardwick and never to marry.

The years preceding 1592, Arbella was considered the natural successor to the throne upon the death of Queen Elizabeth I. She was, after-all born in England and a direct descendant of Henry VII. She was fourth-in-line to the throne and had a better claim to be the crowned queen of the English throne than her cousin, James VI of Scotland. However, this was not to be.

From the end of 1592 and sometime spring of 1593, attention was diverted towards James VI of Scotland as being the preferred heir to the throne. The most influential people, namely the Queen’s Lord Treasurer, Lord Burghley and his son, Secretary of State, Sir Robert Cecil played a key role in this respect.

Soon thereafter, Queen Elizabeth I died. Lady Arbella’s cousin, James VI of Scotland became King James I of England, unifying Scotland, England and Ireland under one monarch, officially known as the Union of the Crowns on March 24 1603.

In May 1603, Lady Arbella Stuart was invited to the royal court in London to meet her cousin for the first time.

In November of 1603, there was a Main Plot, conspired by English courtiers and funded by the Spanish government to overthrow King James I and to replace him with Lady Arbella Stuart. The conspirators invited Arbella to participate and obtained her consent in writing to Philip III of Spain. However, Arbella reported the matter to King James I immediately.

Arbella was well received at the royal court of King James I. Arbella became state governess to Princess Elizabeth, eldest daughter of James I and later in 1605, godmother to Princess Mary.

Lady Arbella Stuart and her marriage

Lady Arbella never suppressed her desire to marry. In 1610, she married William Seymour, known as Lord Beauchamp, later Duke of Somerset from the prominent Seymour family, who themselves had a claim to the throne.

William Seymour was sixth-in-line to the throne. He was the grandson of Lady Katherine Grey, granddaughter of Mary Tudor, the younger sister of Henry VIII.

James I had wondered whether the marriage between Arbella and William was a prelude to an attempt to overthrow him as King.

Arbella and William married in secret, on June 22, 1610 at Greenwich Palace, without the permission of the King.

Within days, the secret was out and for marrying without the King’s permission, a royal warrant was issued for the arrest of Arbella, Lady Beauchamp and Lord Beauchamp.

William was arrested and brought to the Tower of London and Arbella placed on house-arrest in Sir Thomas Perry’s house in Lambeth. The couple had some liberty within the buildings and Arbella corresponded with William through letters. When James I learned of the letters, he immediately ordered for Arbella to be transferred to Durham, to the custody of Bishop of Durham far away from her husband, William Lord Beauchamp in the Tower. Arbella claimed to be pregnant (but she was not), so her departure was delayed.

Arbella and William’s plot to escape

The delay in Arbella’s departure to Durham gave the couple time to plot their escape. They agreed to meet at Lee, Kent to sail to France.

Early in June, dressed as a man, Arbella slipped out of her lodgings and made it to Lee, but William Lord Beauchamp did not meet her there. She boarded the getaway ship to France without her husband.

William did escape from the Tower and made it to Lee but Arbella had already set sail. He caught the next ship to Flanders.

The alarm had now been raised, and the King gave orders to search for and capture Arbella and William. Arbella’s ship was overtaken by the King’s men just before reaching Calais, France. They boarded the ship, arrested Arbella and brought her back to London. She was imprisoned in the Tower. Arbella never saw her husband again.

Arbella only sought freedom to live with her husband but she was kept in closed confinement in the Tower. She was never charged with a crime.

During 1612 and 1613, Arbella’s health deteriorated but she hoped to gain sympathy from her cousin, James I. She wanted to attend the wedding of Princess Elizabeth and went as far as ordering an elaborate dress and matching jewels for the wedding but she was not invited.

It appears that by 1614, Arbella had given up all hope of freedom and by autumn of the same year, she took ill and refused all medical attention. Her health deteriorated, and she died on September 25, 1615 at the young age of 39 in the Tower of London.

Lady Arbella Stuart was refused a royal funeral and denied a ceremony by her cousin, King James I. She was placed in the vault of her aunt, Mary Queen of Scots in Westminster Abbey.

A visit to Westminster Abbey, you will find the vault beneath the south aisle of Henry VII’s chapel.  In the 19th century a small grey stone was put in between the tombs of Mary Queen of Scots and Arbella’s grandmother Margaret, Countess of Lennox, recording burials in the vault. This gives her name and year of burial only. She has no other memorial.

…as she lay, yearning for her freedom, reflecting on her life that would have been, if only…

Born of royal blood and in England, with a better claim to the throne than her cousin James VI, Arbella fell foul of the very same cousin whom she helped protect from the conspiracies of the Main Plot and the Spanish government when he became King of England. She ended her days despairing in the Tower of London.

One wonders…if only she had succeeded Elizabeth I and became Queen of England, the course of history might be so very different – would the Union of the Crowns had taken place? The lines of succession of monarchs would also have been different.

The story of Lady Arbella Stuart is a sad one – another royal caught up in the politics and conspiracies of the day, but one deserving to be remembered, not Forgotten as she was the Uncrowned Queen of England.

Over one hundred letters written by Lady Arbella Stuart were found and some of these were published in 1993.

Navigate to All articles

More on the history of Britain 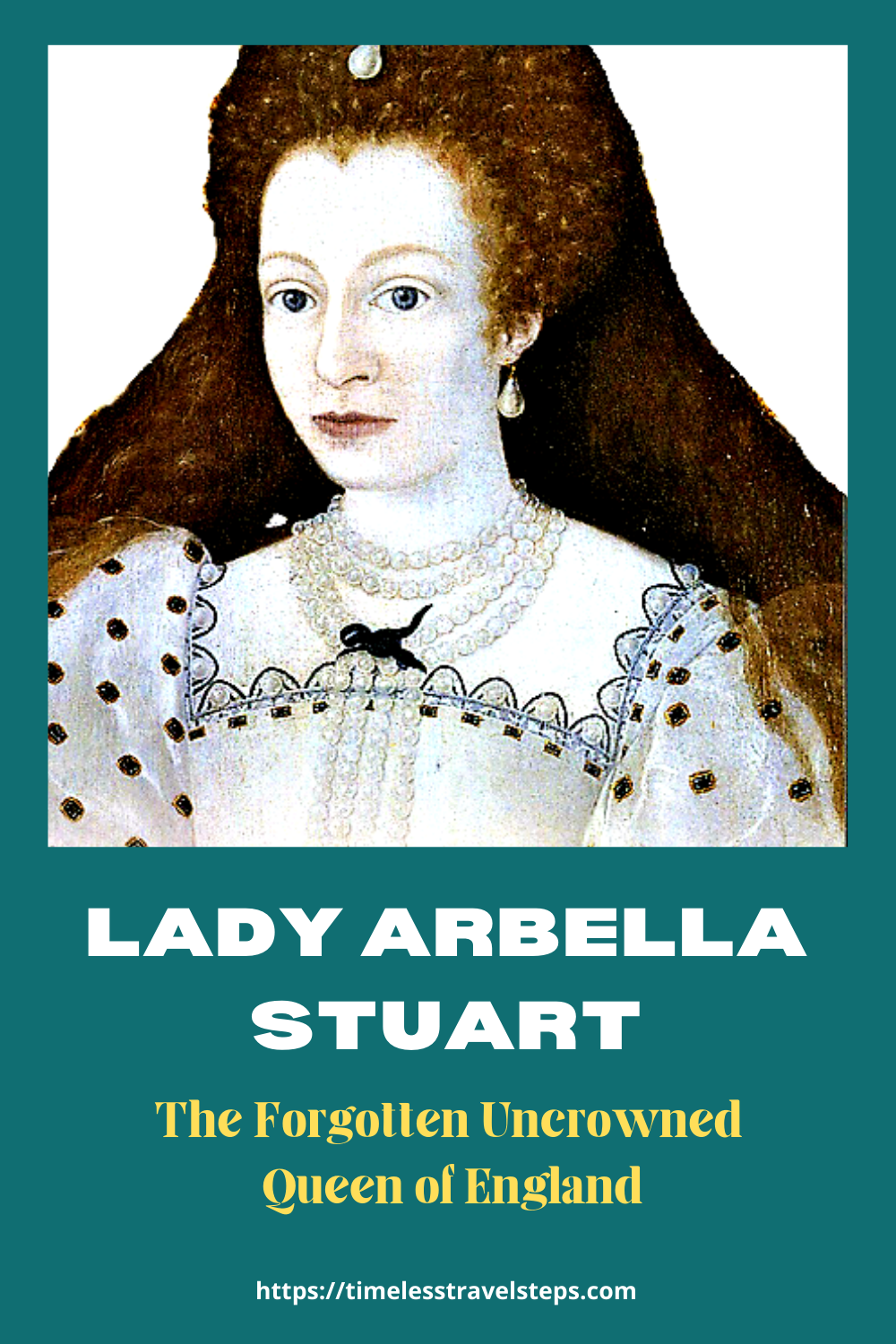