5 Etiquette to observe at a Shinto shrine in Japan

Travel to Japan and you are certain to come across torii gates in bright orange. Some of these torii gates are in water, sometimes singular as an entrance or there may be thousands lined-up a hill. It signifies the entrance to a Shinto shrine. The Fushimi Inari is one of the most popular shrines and touristic destinations in Kyoto. – it has ten thousand bright orange torii gates lined up a mountain! In addtion, there are many Buddhist temples in Japan. Popular ones being in Nara, Uji and Kiyomizu-dera in Kyoto, Japan. Together, there are about 160,000 shrines and temples dotted around this beautiful country. You are certain to visit one of these places with a torii gate or a sanmon at a Buddhist temple.

Shintoism | 5 Etiquette to observe at a Shinto shrine show
5 Etiquette to observe at a Shinto shrine in Japan
Differences between a Shrine, a Temple and Shintoism in Japan – A quick overview
Shrine v. Temple
Shintoism in Japan – A simple overview
Tradition rather than belief
Etiquette at a Shinto Shrine
Etiquette 1 – Bow and walk on either side
Etiquette 2 – Purify yourself with 3-step ritual at the chozuya
Etiquette 3 – Pay your Respects with this 7-step ritual at the shrine
Etiquette 4 – Write your wishes on Ema
Etiquette 5 – Omikuji (100 Yen fortunes)
Selected books on Shintoism
Finally…
Latest Articles
The Rich Japanese Soft Serve Ice Cream
Mighty Dover Castle England in 1 Day
Szentendre — 1 Perfect Day Trip from Budapest
You may like to visit some of these places in Japan also
For the wanderlust in you…
Pin me on Pinterest!
Like this:

Differences between a Shrine, a Temple and Shintoism in Japan – A quick overview

Initially, I found it hard to distinguish between shrines and temples as the etiquette are similar. Nevertheless, there is a slight difference in the etiquette and the rituals you need to observe. As always, it is a matter of choice for visitors to either observe these rituals or not to. You may wish to observe the etiquette, either because you simply want to or out of respect for the Japanese culture. Whatever your reasons may be, it is good to know what to do when you are at a shrine or a temple. However, this post is aimed at etiquette and rituals that relates to a Shinto shrine only.

The next paragraph gives a brief overview on the differences between a Shinto shrine and a Buddhist temple.

Briefly, shrines are associated with Shintoism and temples with Buddhism. The word for a shrine is ‘jinja’ or ‘jingu’ and for a temple is ‘o-tera’. A shrine is marked by a torii gate, mostly in bright orange, dividing the sacred ground from the outside world whereas a temple is marked by a house-like structure called a sanmon. More often than not, you will find Buddhist statutes and images in a temple but none like that in a shrine. What this means is that a shrine is a place where gods reside, and a temple is a place where Buddhas reside.

Shintoism in Japan – A simple overview

The word “Shinto” literally means “the way of kami“ (kami = gods). Unlike other religion, the Shinto faith has no origin, meaning it has no founder or prophets. There is no coded text that outlines Shinto’s principles. With Shintoism, there is no head shrine but there are a collection of shrines honouring local deities.

Thus, the key concepts of Shintoism is based on purity, harmony, family respect and subordination of the individual before a group. Given the lack of definition, hence the resulting flexibility in its concepts may, perhaps be one reason for its longevity. It is said that the Shinto faith is so deeply rooted in Japanese history that it is the indigenous religion of Japan. It cannot therefore, be separated from Japan or the Japanese people as an independent body of thinking. The Shinto faith is of the Japanese character whether the individual claims a religious affiliation or not.

Shintoism went through some changes during the Meiji period. It was somewhat consolidated and became the state religion with the emperor as its head. Legend has it that the emperors of Japan are direct descendants of their first Emperor Jimmu Tenno, the great-grandson of Amaterasu-Omikami, who was present at the founding of Japan. All this means is that the Emperor rules Japan, as it should be because the gods want it that way! Shinto believers’ belief that the gods and spirits (kami) exists in the same world as us, so, they are all around, interacting and existing in places and objects, thus the freedom of their religion.

Tradition rather than belief

Japan is a nation of traditionalists, so praying at the temples or shrines is a matter of fulfilling a tradition rather than belief in the religion. During my stay in Japan for almost 6 months, I visited both shrines and temples and I was drawn to Shintoism. So, in this article, as mentioned, I note the etiquette at a Shinto shrine. If you follow these steps, I am sure that you will be fine.

If you are interested in finding out more on Shintoism in Japan, I have selected a few books that provides a good degree of information. You can find them here

Etiquette at a Shinto Shrine

Etiquette 1 – Bow and walk on either side

As mentioned earlier, the entrance to a Shinto shrine is marked by a torii gate, keeping the outside world from the holy ground of the gods.

When you are at the torii gate, you must first bow before entering the grounds and proceed to walk either on the left or the right. One should not walk in the middle as this is where the gods walk. Many tourists or visitors (me included!) who are unfamiliar with this etiquette do not observe this.

When you are inside the grounds, make your way to the Shinto shrine but before you come before the gods, you need to observe the 2nd etiquette at the chozuya.

Etiquette 2 – Purify yourself with 3-step ritual at the chozuya

Just before the entrance to the Shinto shrine, you will come across a chozuya. A chozuya is a small pavilion with ladles, usually made of bamboo, which lies on a central rest. This is where you purify yourself before approaching the main shrine to pray to the gods.

The etiquette at the Chozuya can be summarised into the following 3-step rituals:

i)    Using your right hand, scoop a ladle of water and pour over your left hand;

ii)   Do the same but this time over the right hand;

iii) Finally, you need to clean your mouth. To do this, using the ladle, pour some water into a cupped hand, swill it in your mouth and spit it out onto the ground.

Don’t wash your mouth directly from the ladle.

When you have completed these 3-step rituals, make your way to the shrine to observe the next etiquette – to pay your respects to the gods. Here, observe the following  7-step rituals:

i)    When you reach the shrine, bow slightly;

ii)  Toss a coin into the box in front of you, the offertory box. The amount does not matter;

iii)   Ring the bell (if one is available), at least two or three times to let the gods know that you are there to pray;

Once you have rung the bell and let the gods know you are there, follow the following four simple steps.

After paying your respects to the gods, you may want to do Ema.

Etiquette 4 – Write your wishes on Ema

It has been said that the kami travelled by horse and the more affluent members of society, at one time, gifted an animal to the shrine to offer them as means of transport and to pray for their coming. However, over time, the customs evolved into offering a picture of a horse instead.

Ema, is a rather popular activity among older teens who are keen to wish for their education success or career prospects, couples who wish for long-term happiness and older generation who wish for good health.

After Ema, you may want to find out about what fortunes are ahead.

You can purchase a slip of paper for 100 yen with fortunes (or misfortunes) written on them which awaits you in all aspects of your life from career, love, health, friendship and education. These are called ‘omikuji’. You can either keep them or tie them to a rope or branches of a tree near the shrines.

Learn more about the Top 5 in Kyoto which you would’t want to miss!

Navigate to recommended books on Shintoism

With over 160,000 Shinto shrines and Buddhist temples dotted all over Japan, I am sure that you will visit one when you are there. I learnt more of the Japanese culture and the differences between the two religions as I continued to visit as many shrines and temples as I could during my stay in Japan. For the Japanese, observing the etiquette at the Shinto shrines or the Buddhist temples was more of a habit than being religious. So, there are no strict rules to observe these etiquette and you do not have to if you do not want to.

I found observing these etiquette were fun and interesting. It broke the habit of just taking photographs! You should try them when you next visit a Shinto shrine and return here to share your experiences.

Is this post valuable to you in planning your visit to a Shinto shrine in Japan? If so please let me know in comments below or via Contact Form, I would love to hear from you. Scroll all the way down for more ideas and inspiring travel stories. Subscribe to join us at Timeless Travel Steps to receive all the latest news and events. As always,

Have an awesome time discovering Japan!

Navigate to All articles on Japan

For the wanderlust in you… 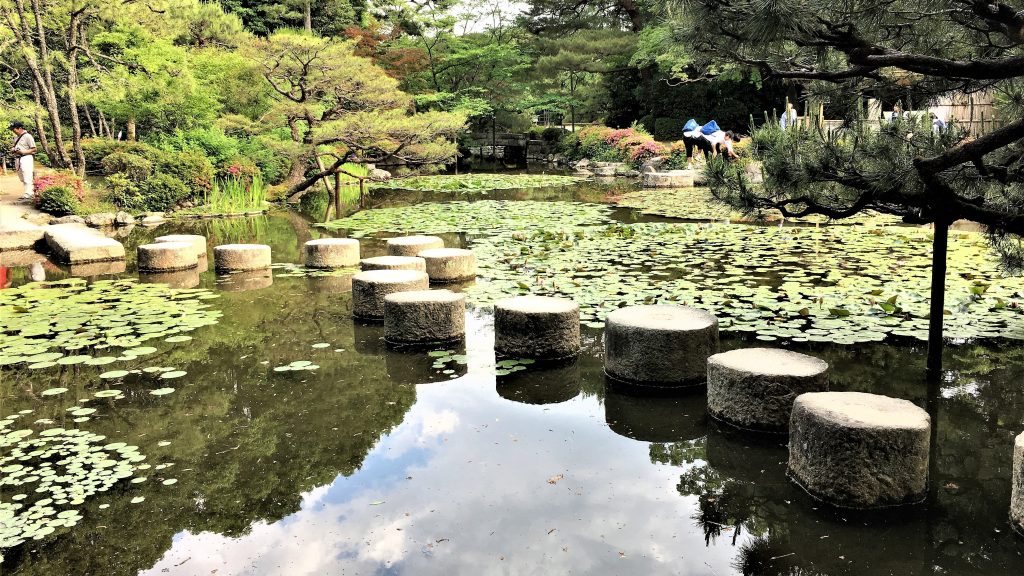 One glass of water doesn’t equal another. One may just appease the thirst, the other you may enjoy thoroughly. In Japan, people know about this difference. – Jil Sander