A stately home, Blickling Hall forms part of the Blickling Estate in the village of Blickling, in Norfolk. The current Jacobean house, Blickling Hall was built on the ruins of a manor house, former home of the Boleyns and birth place of Anne Boleyn. Cared for by the National Trust since 1940, Blickling Hall is a popular destination throughout the year. It is more popular around May 19 each year as visitors try to get glimpses at the ghosts of Blickling Hall.

Blickling Hall is said to be haunted by Britain’s most famous ghost – Anne Boleyn. Each year on the anniversary of her execution, May 19, she is reportedly seen arriving by coach drawn by headless horseman and four headless horses. Dressed in all white, she carries her severed head and glides the rooms and corridors until daybreak.

Sightings of Anne and the carriage have been frequent and reported by witnesses giving it some degree of credibility. In 1979, an apparition, supposedly of Anne was sighted in the library.

Another reported sighting of a ghostly inhabitant of Bickling Hall is Thomas Boleyn, Anne’s father. Thomas Boleyn, Earl of Wiltshire was an ambitious man who engineered the marriage of his daughter, Anne Boleyn to King Henry VIII. He also betrayed Anne and his son George at the trial of Anne to save himself. Anne and George were executed. Folklore has it that for his wrong doings and as penance, he is required to cross a dozen bridges before cockcrows for a thousand years. His route is from Blickling>Aylsham>Burg>Buxton Coltishall>Meyton>Oxnead and finally to Wroxham.

Thomas Boleyn is reportedly seen carrying his severed head under his arms, and gushing flame from his mouth. (There is a flaw in this tale, as Thomas Boleyn died in his bed, with his head intact!)

Headless apparitions of the Boleyns are not the only ghosts of Blickling Hall. This magnificent mansion is said to be haunted by Sir John Fastolfe, the fifteenth century knight. He is seen throughout the building.

A ‘Grey Lady’ has also been reportedly seen floating through walls.

Blickling Estate was originally owned by Sir John Fastolf of Caister between 1380 and 1459. He made a fortune during the Hundred Years’ War. His coat of arms is still on display here.

Later, the property became home to the Boleyns, Thomas Boleyn, Earl of Wiltshire and his wife, Elizabeth Howard, daughter to Thomas Howard, Earl of Surrey between 1499 and 1505. Three of their surviving children were born at Blickling – Mary, Anne and George.

Blickling Estate was purchased by Sir Henry Hobart, Lord Chief Justice of the Common Pleas and 1st Baronet from Robert Clere in 1616. He commissioned Robert Lyminge, the architect to design the current Jacobean structure. The Blickling Hall seen today was built on the ruins of the manor house owned by the Boleyns.

The property stayed in the Hobart’s family until it was passed down to William Kerr, the 8th Marquess of Lothian.

During the Second World War, the house was requisitioned and served as the Officers Mess of the RAF Oulton. Afterwards, the house and the entire Blickling Estate was passed to the National Trust.

The house was de-requisitioned after the war and the National Trust rented it out to tenants until 1960. The Trust began working on the property to restore it to its historical style and beauty. The house, Blickling Hall, Gardens and Park was opened to the public in 1962 and has continued to be cared for by the National Trust and remains open the same to this day.

Blickling Hall, Gardens and Parkland that forms Blickling Estate is cared for by the National Trust. It is said that one day at the Estate is never enough! Nevertheless, if one day is all you have, then a visit will not disappoint as the Blickling Estate has something for everyone.

The Gardens and Park are open throughout all seasons but to avoid disappointment, ensure to pre-book your visit.

Plan your visit to Blickling Estate

How to get to Blickling Estate

Blickling Estate is located at the following address:

Services from Norwich to Holt and Sheringham, alight at Aylsham, then 2.8 km (1.5 miles)

Peruse further on some carefully selected accommodation options in Aylsham, Norfolk to suit your style by navigating to this page.

If you have enjoyed reading this post on Ghosts of Blickling Hall, you may also like to learn a more on the history of Britain and wider UK. Here are some suggestions for you:

The Boleyn Lineage | An overview and connections to the Royal Family

Tower of London | Best Guide to what you need to know.

Magnificent Crown Jewels at the Tower

Prisoners at the Bloody Tower

Top 9 Super Spooky and Haunted Places on Isle of Wight

On a final note …

My sincere wish is that you enjoyed reading this post and you shall enjoy reading all related articles on this blog. This page is curated to add value to your visit to Blickling Hall and I would love to hear your thoughts on this post. Do let me know in comments below. 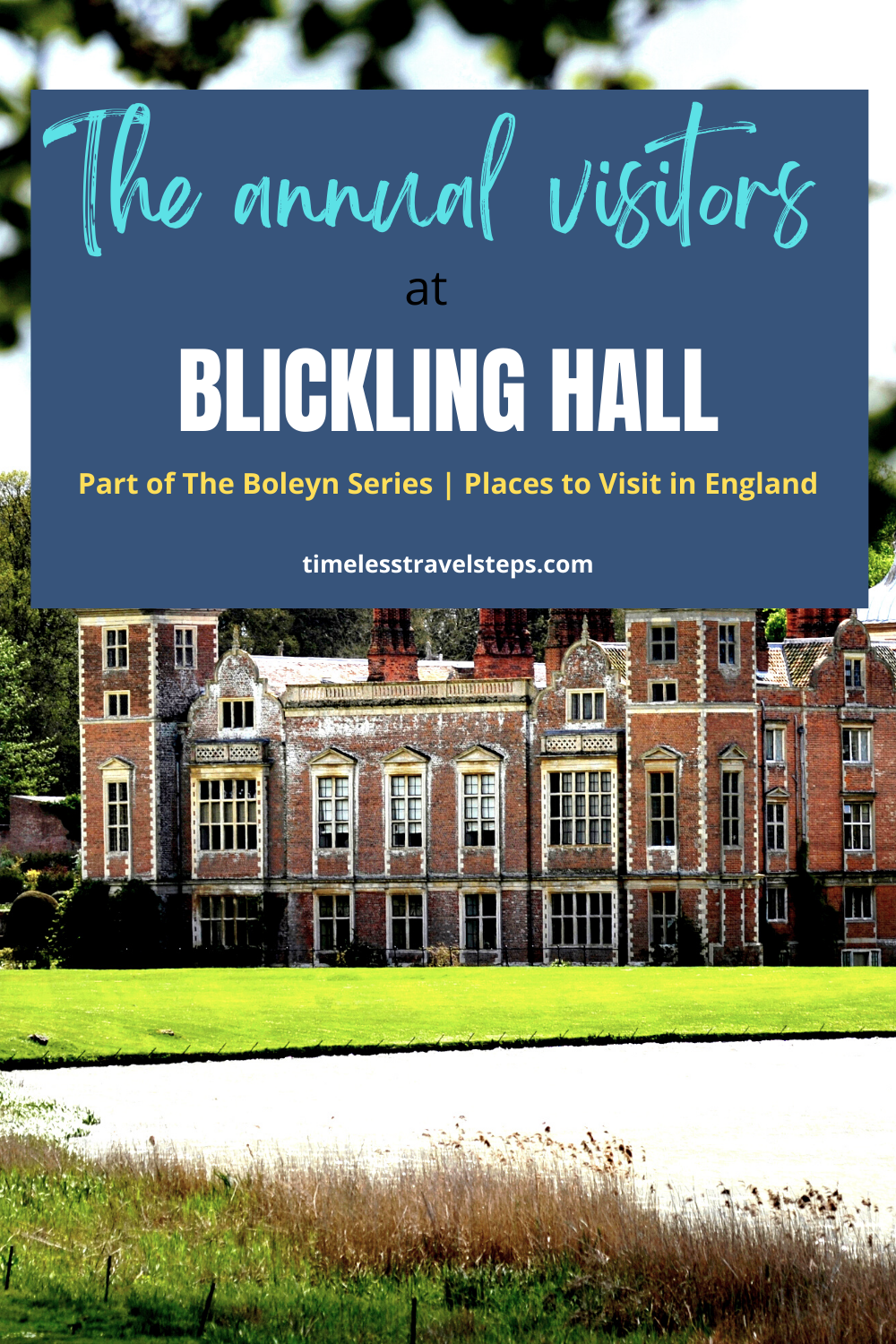